Ours are (by nature) unusually plastic brains whose biologically proper functioning has always involved the recruitment and exploitation of non-biological props and scaffolds. More so than any other creature on the planet, we humans emerge as natural-born cyborgs, factory tweaked and primed so as to be ready to grow into extended cognitive and computational architectures: ones whose systemic boundaries far exceed those of skin and skull. (p5 — emphasis added)

Andy Clark’s WP fab Natural Born Cyborgs? is at times techno-lyrical to the verge of incomprehension (or overpretentiousness — normal pretentiousness is of course to be cherished), but there are many thought-provoking paragraphs to be found in this essay of his (also the introduction of his same-titled 2003 book AM).

The conjecture, then, is that one large jump or discontinuity in human cognitive evolution involves the distinctive way human brains repeatedly create and exploit various species of cognitive technology so as to expand and reshape the space of human reason. We, more than any other creature on the planet, deploy non-biological elements (instruments, media, notations) to complement (but not, typically, to replicate) our basic biological modes of processing, creating extended cognitive systems whose computational and problem-solving profiles are quire different from those of the naked brain. Human brains maintain an intricate cognitive dance with an ecologically novel, and immensely empowering, environment: the world of symbols, media, formalisms, texts, speech, instruments and culture. (p4 — emphasis added)

The cognitive anthropologist Ed Hutchins WP, in his book Cognition In The Wild AM depicts the general role of cognitive technologies in similar terms [i.e. as thought prosthetics], suggesting that “[Such tools] permit the [users] to do the tasks that need to be done while doing the kinds of things people are good at: recognizing patterns, modeling simple dynamics of the world, and manipulating objects in the environment.” This description nicely captures what is best about good examples of cognitive technology: recent word-processing packages, web browsers, mouse and icon systems, etc. It also suggests, of course, what is wrong with many of our first attempts at creating such tools: the skills needed to use those environments (early VCR’s, word-processors, etc.) were precisely those that biological brains find hardest to support, such as the recall and execution of long, essentially arbitrary, sequences of operations. (p4 — emphasis added)

The book itself AM I haven’t (yet) read. Something at first warned me away from it, making me imagine it would be too repetitive and “impressionistic”. But I just read the quote below, and I’m intrigued. It’s on the wishlist. 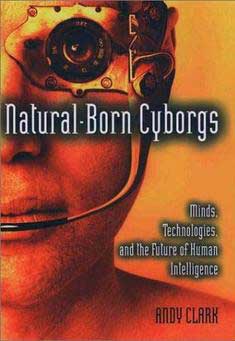 These [Alzheimer] patients were a puzzle because although they still lived alone, successfully, in the city, they really should not have been able to do so. On standard psychological tests they performed rather dismally. They should have been unable to cope with the demands of daily life. What was going on?

A sequence of visits to their home environments provided the answer. These home environments, it transpired, were wonderfully calibrated to support and scaffold these biological brains. The homes were stuffed full of cognitive props, tools, and aids. Examples included message centers where they stored notes about what to do and when; photos of family and friends complete with indications of names and relationships; labels and pictures on doors; “memory books” to record new events, meetings, and plans; and “open-storage” strategies in which crucial items (pots, pans, checkbooks) are always kept in plain view, not locked away in drawers.

Before you allow this image of intensive scaffolding to simply confirm your opinion of these patients as hopelessly cognitively compromised, try to imagine a world in which normal human brains are somewhat Alzheimic. Imagine that in this world we had gradually evolved a society in which the kinds of scaffolding found in the St. Louis home environments were the norm. And then reflect that, in a certain sense, this is exactly what we have done. Our own pens, paper, notebooks, diaries, and alarm clocks complement our brute biological profiles in much the same kind of way. Yet we never say of the artist, or poet, or scientist, “Oh, poor soul — she is not really responsible for that painting/theory/poem; for don’t you see how she had to rely on pen, paper, and sketches to offset the inadequacies of her own brain?”