The Secret Lives of Numbers

Overview and Detail. The pair keeps coming up whenever you start pondering on interfaces, interface patterns, interface & information design, and well (why won’t be grand?) space, time, ELZR and thought itself. Achieving both — the ancient dream of simultaneity — is one of the deep purposes of any media creator, from writers EE to interface designers, and though it may be a humble example, The Secret Lives of Numbers — an interface to the results of a crazy study of the search-engine popularity of every integer between 0 and 1 million1 — is a superb one.

The resulting information exhibits an extraordinary variety of patterns which reflect and refract our culture, our minds, and our bodies.. We surmise that our dataset is a numeric snapshot of the collective consciousness. Herein we return our analyses to the public in the form of an interactive visualization, whose aim is to provoke awareness of one’s own numeric manifestations.

The Secret Lives of Numbers — About (emphasis added) 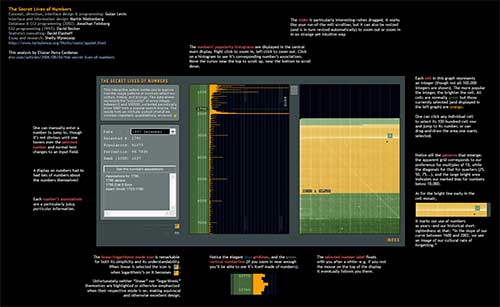 Click to view a 3.15-Mb PDF critique of the interface (right-click and select Save Link As to download)

The denizens of the number line are not the mere automatons or corporate tools we have made them out to be: each has a personality, talents, communities, and sometimes a little je ne sais quois. They reflect us. This unusual reflection is the focus of this project.

The Secret Lives of Numbers — Statement

As for the credits:

If you believe in geniuses you’re in for a treat checking out the three URLs above — each of them’s one. Martin Watenberg in particular, has some of the most intriguing information visualizations I’ve ever seen.

fn1. Though owing to limitations of internet bandwidth only data for the first 100,000 are provided online.