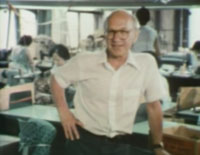 Milton Friedman ^ WP, E died 9 days ago, November 16, and though I wanted to write about it that day, I dared not. I had mostly read only about him, his life, his reputation, and reverberations of his arguments; I had bought but not yet read two of his books ELZR; treasured a sentence (“The free market is the only mechanism that has ever been discovered for achieving participatory democracy.”) found in the only thing I had read from him (the prologue to Hayek’s Road to Serfdom "^AM“:http://www.amazon.com/Road-Serfdom-Fiftieth-Anniversary/dp/0226320618); and deeply admired his son, David Friedman ELZR. In other words, I could only lay claim to love the idea of the idea of the man ”p">(2^nd^ degree platonic love, common personal affliction). I knew I’d fall in love with him, I only needed time, and so I didn’t dare write an obituary that Thursday — but I’m gonna.

I’ve downloaded Friedman’s Free to Choose series (also available as a free stream) to watch as I read the sametitled book AM and the first episode has already confirmed Friedman as a most worthwhile man. Far as I can gather from a sample of 1, the series consists of a brief, excellent documentary narrated by Friedman, followed by lively debate with a group of economists, politicians, and businessmen. As much as I’m lately having serious misgivings about arguing in general, it’s a pleasure to watch him passionately refute and belie his often downright frightening partners in debate (“It’s demagoguery, if you’ll pardon me, Michael Harrington…”).

Seeing those suited men from the seventies I couldn’t help but think of what future debates on the subject will be like. One of the intriguing things about Milton Friedman is how his ideas have been carried on by his children. Himself the greatest XX^th^ century defender of capitalism, he still didn’t dare (?) take the leap to anarchism (he couldn’t have put it more bluntly at the debate from Free To Choose‘s first episode: “I am not an anarchist. I am not in favor of eliminating government. I believe we need a government.”). His son, David Friedman ELZR, is on the other hand the most prominent anarchocapitalist alive, and David Friedman’s son, Googler Patri Friedman, wants to homestead the oceans in turn.

One can only wonder what little Tovar Miles Friedman will come up with.