The Chance Causality of Talent

This time a fascinating little gem from the cover article, The Expert Mind, of this month’s Scientific American: The month you were born plays decisive importance into whether you’ll become a professional soccer player or not. That’s a fact. 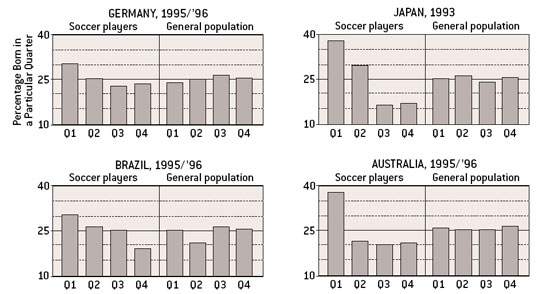 A 1999 study of professional soccer players suggests that they owe their success more to training than to talent. In Germany, Brazil, Japan and Australia, the players were much more likely than average to have been born in the first quarter (Q1) after the cutoff date for youth soccer leagues.. Because these players were older than their teammates when they joined the leagues, they would have enjoyed advantages in size and strength, allowing them to handle the ball and score more often. Their success in early years would have motivated them to keep improving, thus explaining their disproportionate representation in the professional leagues.

NOTE: The cutoff dates were August 1 for Germany, Brazil and Australia, and April 1 for Japan.

In a classic 1977 review, the psychologists Richard Nisbett and Timothy Wilson argued that many of the causes of our choices never enter our consciousness. Here is a simple example. If you present people with an array of articles of clothing and ask them to pick one to keep, they tend to pick the rightmost one. But if you then ask them to list the reasons they chose that article, no one says, “Because it was the one on the right.” They cite only the features of the objects themselves. Not having served in experiments in which the same items were presented in different orders, people have no grounds for knowing that a dumb factor like left-to-right position could be a cause of their behavior. And that’s a major problem for memories of what influenced us: None of us has taken part in the experiments that would isolate the causes of our choices in life.

[Ultimately,] chance must play an enormous role in development. We might be shaped by whether an axon zigged or zagged as our brains jelled in the womb, whether we got the top bunk or the bottom bunk, whether we were dropped on our head, whether we inhaled a virus. Needless to say, few people cite factors like these among their childhood influences..

Steven Pinker, How we may Have Become What We Are