Sunny Bains’s Mixed Feelings is a cool article in last month’s Wired about synthetic synesthesias: using technology to give us new senses by using old ones’ bandwidth. Stuff like using the tongue to see, or, below, using touch to locate.

For six weird weeks in the fall of 2004, Udo Wächter had an unerring sense of direction. Every morning after he got out of the shower, Wächter, a sysadmin at the University of Osnabrück in Germany, put on a wide beige belt lined with 13 vibrating pads — the same weight-and-gear modules that make a cell phone judder. On the outside of the belt were a power supply and a sensor that detected Earth’s magnetic field. Whichever buzzer was pointing north would go off. Constantly.

The brain, it turns out, is dramatically more flexible than anyone previously thought, as if we had unused sensory ports just waiting for the right plug-ins. Now it’s time to build them.

“It was slightly strange at first,” Wächter says, “though on the bike, it was great.” He started to become more aware of the peregrinations he had to make while trying to reach a destination. “I finally understood just how much roads actually wind,” he says. He learned to deal with the stares he got in the library, his belt humming like a distant chain saw. Deep into the experiment, Wächter says, “I suddenly realized that my perception had shifted. I had some kind of internal map of the city in my head. I could always find my way home. Eventually, I felt I couldn’t get lost, even in a completely new place1.”

Wired 15.04, Sunny Bain, Mixed Feelings: See with your tongue. Navigate with your skin. Fly by the seat of your pants (literally).

Some intriguing stories here about the brain that will delight anyone who has read Jeff Hawkin’s mind-bendingly good On Intelligence AM. Another example: 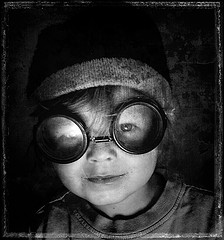 More than 50 years ago, Austrian researcher Ivo Kohler gave people goggles that severely distorted their vision: The lenses turned the world upside down. After several weeks, subjects adjusted — their vision was still tweaked, but their brains were processing the images so they’d appear normal. In fact, when people took the glasses off at the end of the trial, everything seemed to move and distort in the opposite way.

Wired 15.04, Sunny Bain, Mixed Feelings: See with your tongue. Navigate with your skin. Fly by the seat of your pants (literally).

Of course any true Jeff fan would nod knowingly and immediately quote back with:

Patterns are all the brain knows about. Brains are pattern machines. It’s not incorrect to express the brain’s functions in terms of hearing or vision, but at the most fundamental level, patterns are the name of the game. No matter how different the activities of various cortical areas may seem from each other, the same basic cortical algorithm is at work. The cortex doesn’t care if the patterns originated in vision, hearing, or another sense. It doesn’t care if its inputs are from a single sensory organ or from four. Nor would it care if you happened to perceive the world with sonar, radar, or magnetic fields, or if you had tentacles rather than hands, or even if you lived in a world of four dimensions rather than three.

Jeff Hawkins, On Intelligence AM, p2

Being a fan of the concept since my soundscape post, however, I was surprised the article doesn’t mention the inspiration for my post and the most widespread example yet of a synthetic synesthesia: the beeping proximity sensor in many vehicles — space as sound. My brain has become so used to it that at times glancing back seems like a distraction.

1 This quote on space perception got me thinking about time. Is time perception a sense? Are there animals who can, say, stand in an isolated room and yet be able to tell the time? Do watches (time perception through vision) count as synthetic synesthesias? Would something like the above belt — with different intensity buzzers in the place of clock hands — work for time? It would be different from a watch in that you would always know the time, probably not even be conscious of knowing it after a while. Would people become time oriented in a similar way that they become space oriented? Would time become intuitive?