I lived for 3 months in Spain. I shared a room with 3 other people in a nice, simple flat in the northeast of Madrid. Less than 10 minutes away walking was a big mall with a cheap hypermarket, my gym, and the local public library. I was very happy. 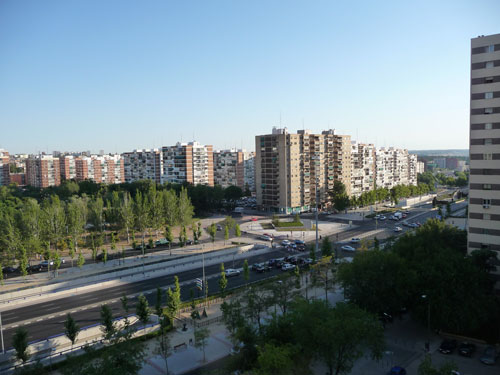 I was able to live well with less than $1k per month. I deliberately lived a very simple life. I was coming from not being able to really focus in Japan for many months — because I was living in a hostel, with several people in one room, or because when I wasn’t I was sharing a flat with my sister and my girlfriend for less than a month each time. And because for most of my stay in Japan I lacked the courage and motivation to really focus, recovering as I was from a deportation from the States.

So focus I did in Madrid. My first couple of weeks were phenomenally productive, I tackled several projects I had long thought about: backbars for Wikipedia, backbars for social link sites, an Economist reader, a TED talk translation, PhotoMap… And then I started working on a music project with some friends back in San Francisco and I’ve been pouring myself into that wholeheartedly, it’s been really challenging and fun. The only (public) projects I managed to squeeze while at it were Harpoon, a White Youtube sketch, and Icons on A&L.

Of Spain itself I got to see only Barcelona, which drew me off almost instantly with its Catalan insistence and its insecurity, and Madrid, which I only got to really explore during the first weeks while I figured out where to live and what to do. Frankly, soon enough I felt under no big pressure to explore the city or the country, which was a relief because I could free my mind without guilt to make stuff.

My take of Spain is that it’s a safer, upper-middle-class Mexico. It’s a pleasant place to live. It’s just not much challenging to me — culturally and linguistically it’s incredibly similar to Mexico, the good parts and the bad parts. In terms of technology, web or otherwise, I feel it’s no better than Mexico, for me. Spain is wealthier per person and has excellent broadband speeds because it’s not under a telcom monopoly as Mexico is but it’s also a huge laggard in science & tech, particularly web tech, and the general English level is abysmal. Mexico is just as wealthy a market in aggregate terms and being right next to the United States really matters.

Of continental Europe in general I only got to to visit Spain, Portugal (Lisbon) for a weekend, and France (Paris & Marseille) for some 10 days total. In other words, Southern Europe. I have the strong suspicion that Northern Europe, particularly Scandinavia, is much more appropriate to my character and interests. Of Southern Europe, all I can say is that it’s a very (sometimes, like in Lisbon, very)) pleasant place to live but definitely not particularly interesting to what I want to do with my life, which is make stuff.

Some of the things I’m happiest about during this time are taking care of my body and my nourishment. I went to the gym 6 days per week for more than 2 months, I discovered how rewarding and relaxing and stabilizing exercise can be (a fitting lesson to learn in the world’s new sport’s superpower). I learned to be completely self sufficient in procuring and cooking tasty and healthy food in a sustainable manner. This matters greatly to me, because together with my frugal lifestyle, it gives me the confidence that I’m able to afford my dreams right now.

I’m also happy that I managed to eliminate almost all commutes to a few pleasant minutes walking, it really matters for personal happiness. Also interestingly, I deliberately learned to live in a hot place without aircon: you learn to tolerate and even enjoy sweating all day.

But the thing I’m definitely happiest about is being able, despite the distance, to maintain and grow my relationship with her.

Things to work on for the next months are sleep and work rhythms (that perennial problem), getting back to a more social mode, learning Japanese, and getting back on track churning out personal projects when my current job ends.

I originally came to Spain because I thought it was a great opportunity in terms of immigration, it still is, but I no longer thing it is for me. And now with Canada, my other choice for immigration, not on my near term future, my thoughts on what I want have been changing a lot. The more places I know and the more I learn, the more I feel up to the challenge of making for myself a free, private, happy, nomad life.