Remember that wacky koan ELZR about reading processors (“what is to reading what a word-processor is to writing?”) and how it led to the idea of a text spacer (illustrated at length in this example)?

Well, I just found out about Live Ink by Walker Reading Technologies (via KurzweilAI.net’s newsletter, though it was slashdotted earlier) and realized people have been toying with the idea for over a decade now. Live Ink is clumsy marketese for what they also elegantly and precisely describe as visual-syntactic text formatting and these guys have not only coded it and are now marketing it, but they have already done some interesting homework, carrying on a year-long experiment where it allegedly improved reading proficiency. They offer a 30-day trial program implementing the technology called ClipRead (screencast) and though the interface is positively abysmal (why, god, why, must bad interfaces happen to good people?), it’s still very much worth downloading to play with.

Here below is a (fitting) paragraph from Charlie Stross’s Accelerando for comparison. 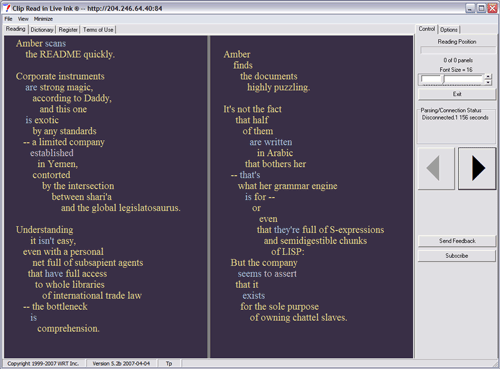 Amber scans the README quickly. Corporate instruments are strong magic, according to Daddy, and this one is exotic by any standards — a limited company established in Yemen, contorted by the intersection between shari’a and the global legislatosaurus. Understanding it isn’t easy, even with a personal net full of subsapient agents that have full access to whole libraries of international trade law — the bottleneck is comprehension. Amber finds the documents highly puzzling. It’s not the fact that half of them are written in Arabic that bothers her — that’s what her grammar engine is for — or even that they’re full of S-expressions and semidigestible chunks of LISP: But the company seems to assert that it exists for the sole purpose of owning chattel slaves.

I like how they limited the spacing to linebreaks and indents; it’s a good starting constraint — it simplifies the task enormously and the results are still quite good. Highlighting the verb is also a clever touch — the nuance with the biggest syntactic payoff. Overall, while the simple flaws do stand out (because we’re such effortlessly gifted syntactic parsers), what surprises me is how decently it works, how the formatted text feels more accessible than the monolithic paragraph. At several points — interestingly, at some of the most usefully formatted parts — the algorithm at work seems oddly straightforward: nestedly indent and linebreak prepositions. Ahh… I’m itching to write some regex hack… Probably will write one in a couple of days, together with some handcrafted spacing of the above paragraph, just to see what we’re aiming at.

According to VentureBeat, meanwhile, the company is poised to taking the world any minute now. I doubt it. But they have given spacing (visual-syntactic text formatting) a broad hearing and there’s now a flurry of attention on it and, probably, on the broader idea of reading processors. There are bound to be some intriguing reinterpretations and extrapolations in the coming months.