I used to dig Greek mythology as a pimpleless child and one of the myths I recall more vividly is the one of Arachne WP — I still remember my childish confusion and anger at the Greeks’ twisted moral sense. 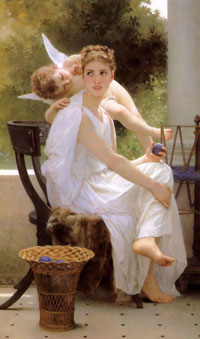 Arachne was a plain Lydian maiden of humble origins who became the greatest weaver in the ancient world. People all over the Aegean WP made a pilgrimage to her studio not only to buy her tapestries but to admire her at work — such was her talent. But when god-fearing rubes complimented her work saying she had surely been taught by Athena WP — the goddess of arts and crafts — herself, tough-minded, proud Arachne didn’t welcome the comparison. She knew herself to be the best weaver there ever was, mortal or not, and she didn’t hesitate to challenge anyone who thought otherwise.

Even-prouder Athena wouldn’t stand this and took the insolent weaver’s challenge. The contest was to create the finest tapestry there ever was, and in the fretful months it lasted, crowds of men and gods, paupers and kings, gathered in awe around the two wilful women. Arachne being a mortal, barely ate or slept at all to keep up with Athena’s pace, and thus she withered as her work bloomed. In the end both works were of exquisite subtlety, painful in their detail and humbling in their magnificence, but it was clear after examination that Arachne’s was better. There was something in her weave’s reds, deep as blood, and something in her blues, deep as her pupils, that spoke of humanity and struggle and fragility in a way Athena’s vain, effortless perfection knew nothing about. Athena realized this, and as she saw the crowd inching toward Arachne’s tapestry, she attempted one last ruse and through her magic brought her own tapestry to life. Shapes and profiles moved and glowed in tawdry flashiness that won her the crowd.

Arachne couldn’t bear her unfair defeat and hanged herself in shame. But the goddess granted her no rest and revived Arachne into the first spider there ever was, bound for eternity to weave senseless patterns to remind men of their place.

Oh Arachne! Your tragic tapestry’s as fair now as it’s always been! You shall not be forgotten, be peaceful weaver, for in the 20^th^ century you’ve been reborn in America, as a fiddler, and your impudent song will live on.

When he came across this young man
Sawing on a fiddle and playing it hot
And the devil jumped up on a hickory stump
And said, "Boy let me tell you what

“Now you play pretty good fiddle, boy
But give the devil his due
I bet a fiddle of gold against your soul
‘Cause I think I’m better than you”

The boy said “My name’s Johnny
And it might be a sin
But I’ll take your bet, you’re gonna regret
‘Cause I’m the best that’s ever been”

And he pulled the bow across the strings
And it made an evil hiss
Then a band of demons joined in
And it sounded something like this:

When the devil finished Johnny said
“You’re pretty good, old son
But sit down in that chair right there
And let me show you how its done”

Fire on the mountain, run boys run
Devil’s in the house of the rising sun
Chicken in the breadpan pickin’ out dough
Granny does your dog bite? No child no

Johnny said “Devil, just come on back
If you ever want to try again
I done told you once, you son of a bitch
I’m the best that’s ever been”

Fire on the mountain, run boys run
Devil’s in the house of the rising sun
Chicken in the bread pan pickin’ out dough
Granny will your dog bite? No child no

Charlie Daniels WP, The Devil Went Down To Georgia^WP, MP3 ^