What was meant to happen, happened. I ended up participating in my own infodesign calendar challenge (where, of course, I’m one of the judges — my mom and a friend being the other two). Rather, I was one of the judges. The challenge’s doing a lot of soul-searching right now, looking for new judges, and even wondering whether it would be better to call itself a cooperation instead of a competition. (Thoughts?)

I started the challenge because while I thought designing a better calendar was a fascinating problem, I had no idea whatsoever of how to attack it. Then a magical thing happened with other people’s submissions: no big idea came, but a myriad minor improvements suggested themselves. So I started building mockups and tweaking them a little here, a little there, to prove minor points to myself. The tweaking got out of control, ate more and more of my time, and suddenly biggish, elegant ideas started coming up.

So I spent the past 5, 6 days drawing calendars over and over (and over). It was part escapism from my grandfather dying in the room below mine, but it was also unbelievable fun designing something and then have it be extruded into atoms by my clunky but trusty HP — how concrete and intricate, how physical! EEM I felt like a miniature artisan or a clockworker. And it really is wonderful to work in a simple problem you can easily explain to people.

This down here is the current outcome (there’s a Spanish version here). Click on it for detailed instructions (if you need’em), descriptions and critique. It’s the end result of a lot of incremental improvements I’ve painstakingly tried to document in this Flickr set — funny it now looks so glaringly obvious. 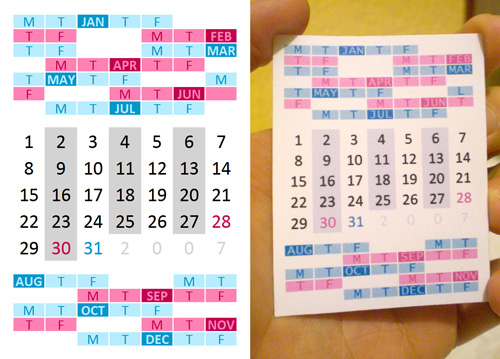 What do you think? I’ve fiddled with it for several days now and have returned to it again and again. My tired eyes see no clear way of improving it — how about yours? (Here, btw, is the ((Excel 2007) source file — yours to fiddle with and build upon.))

((btw2: I did all my prototypes in my beta-testing version of Excel 2007 ELZR. Thought it would be a good chance to take it for a spin and see what the much-vaunted interface improvements amounted too. Turns out they’re rightly vaunted. It’s as good as they told you and then a little better. It’s just so much easier, so much more pleasurable to use the program when so many options are so neatly displayed. The live previews I thought so little of in the videos turn out to be surprisingly helpful. Goodbye toolbar clutter, welcome ribbon. It’s a revolution worth Vista’s failed one.))