I would like my act to be as weird, as jet, as festival

Few things are as satisfying as repaying long-forgotten debts to our older selves. Finally reading a book by Richard Rodriguez ELZR (Brown) is such a redress. Meeting again his very own brand of culture self-appropriation I find it more bracing than ever: )his paragraphs make my skin tingle. 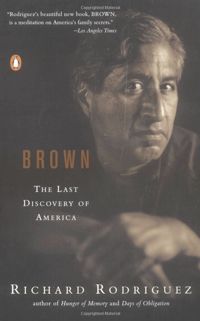 Despite laws prohibiting black literacy in the nineteenth century, the African in America took the paper-white English and remade it (as the Irish and the Welsh also took their English), wadded it up, rigmarolled it, rewound it into a llareggub rap, making English theirs, making it ideosyncratically glamorous (Come on now, you try it), making it impossible for any American to use English henceforward without remembering them; making English so cool, so jet, so festival, that children want it only that way.

Mabel Mercer [a black Englishwoman] performed the songs of Porter and Coward and such with a perfect mid-Atlantic pronunciation, which is to say, without a trace of melanin in her voice. This was not ventriloquism or minstrelsy or parody —I was disappointed to learn it wasn’t— but the voice was authentic to Mercer because she had been educated by British nuns who insisted upon public-school education. Another cabaret singer of that time, Anita O’Day, quoted in a book I can’t find, described Mabel Mercer thus: “That chick has the weirdest fucking act in show business.”

I would like my act to be as weird.

But a whole nother surprise has been to discover just what a deliriously talented writer he is. His essays are not logical, propositional arguments, they are rather a messy (but very sophisticated) alternate reality, now lyrical, now concrete as smell, now tangential with the arcane references.

Brown is a bit of a cave in my memory. Like Delia’s eyes.

Lights up, then, on Theme from a Summer Place, on blue and gold and electric guitar strings. A decade on. I am staying for a month of summer in Laguna Beach with the family of my best friend, Larry Fahery. I am covered with a cool film of Sea & Ski, as is Larry, though I suspect the insistence on this precaution by larry’s mother is gratuituous in my case. Larry’ s mother is sitting on the deck with a neighbor, a red-faced woman with protuberant pale blue eyes, penciled eyebrows. The bug-eyed woman burbles into her tomato juice cocktail, “some niggers…” (ah, ah, ah, I can feel the hairs life on the back of my neck) “…some niggers came onto the beach over the weekend..” (she glances at me while she is saying this; her eyes are needles; I am the camel) “…we let them know they weren’t welcome.” It is not clear where I fit into her use of the first-person plural. Finally, however, my presence does not disturb her narrative.

Hearing the news [Carl T. Rowan died], I felt the sadness one feels when a writer dies, a writer one claims as one’s own — as potent a sense of implication as for the loss of a body one has known..

It’s a kind of possession, reading. Willing the Other to abide in your present. His voice, mixed with sunlight, mixed with Saturday, mixed with my going to bed and then getting up, with the pattern and texture of the blankt, with the envelope from a telephone bill I used as a bookmark. With going to Mass. With going to the toiled. With my mother in the kitchen, with whatever happened that day and the next; with clouds forming over the Central Valley, with the flannel shirt I wore, with what I liked for dinner, with what was playing at the Alhambra Theater. I remember Carl T. Rowan, in other words, as myself, as I was. Perhaps that is what one mourns.