I know why manga are so good

It’s because they’re so bad.

Some days ago I bought my first manga WP on a whim (Kare Kano^ WP, IH^ and Furuba^ WP, IH^). I couldn’t believe my eyes reading them. They were so bad, so unlike any other comic I had seen.

They were black and white, with extremely simple, sketchy, cartoonish drawing — much of it seemingly left undone, symbols almost. Text was everywhere, sometimes in sketchy balloons, often not, often pointing (pointing!) cutely at things in tiny, jokey blurbs. Personal, painfully amateurish messages from the author were interspersed along the text (“As I’m writing this, I’ve been cutting my hand on the paper a lot.”). There were patterns instead of scenery, when there was any scenery at all. Long shots took entire panels, empty and mood-setting. Panels felt like paragraphs instead of pigeonholes and drawings flowed in and out of them, below and atop. By far, most panels were filled with people interacting, their faces and expressions. Closeups were everywhere. Everything was just so loose, so personal, so free, so bad. 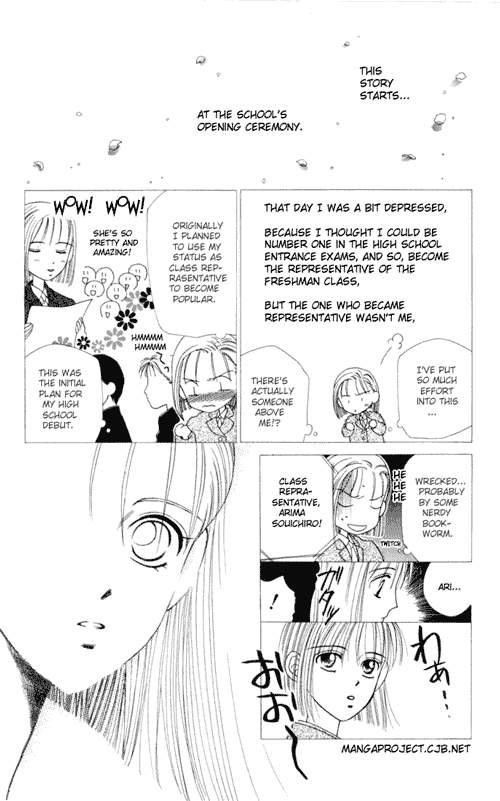 But it was fun like I hadn’t had since my childhood comics (particularly Kare Kano). Both the story (in the case of Kare Kano, a love story between two top students who have been faking their perfection) and the way that story was told was like nothing that I had seen in a comic — these were not the movie storyboards of most comics, it was some strange new form of show-and-tell storytelling (remember the pointing!) that fused words and pictures. I ate it up.

Under the immense time and budgetary constraints mangaka WP work they exploded their craft and kept only its barest essentials — manga feel to Western comics like modern books do to illuminated manuscripts WP. The style they ended up with allowed a single person to create a comic. Creativity and diversity like nothing fiction had seen in a long time was unbounded. I don’t doubt most manga are crap — remember Sturgeon’s law WP — but there are just so many of them that the rare masterpieces started piling up long ago.

But don’t take my word for it, go ahead and read some manga. There’s nothing like it.