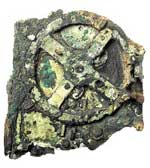 There was recently (November 2006) an article in Nature about the famous Antikythera Mechanism WP, a strange Greek contraption from the second century B.C.E. that with its gears and dials is considered by some the first (astrological) computer. Nothing like it is known in human history until a thousand years later (which prompted Professor Mike Edmunds, one of the article’s authors, to regard it as “more valuable than the Mona Lisa.”). Using new advanced imaging techniques the researchers were able to discover much previously hidden complexity in the device and established it was used to model the position of the moon and probably that of other planets. The article was all over the news (in 2002, another famous analysis was released and it was also broadly covered).

Then there’s Richard Feynman and his letters, gathered by her daughter and published in an also fairly recent (April 5, 2005) book titled Perfectly Reasonable Deviations From The Beaten Track AM. And there’s one from Athens that mentions Feynman’s encounter with a funny little Greek mechanism. It’s a gem of a letter, full of wisdom about science, history, and modernity.

Dear Gweneth, and Michelle (and Carl?) [Carl was expected home shortly, after spending part of the summer working in Massachusetts.]
This is my third day in Athens.

I’m writing by the side of the hotel pool with the paper in my lap because the tables are too high and the chairs are too low.

The trip was all on time but uncomfortable anyway because the plane from N.Y. to Athens was absolutely full — every seat. I was met by a Prof. Iliopoulos, a student, and his nephew, who is just Carl’s age. I was surprised to find the weather here just like in Pasadena (but about 5° cooler) — the vegetation is very similar — the hills look bare and desert like — same plants, same cacti, same low humidity and same cool nights. But there the similarity ends. Athens is a sprawling, ugly, noisy, exhaust-filled mess of streets filled with nervous traffic jumping like rabbits when the lights go green and stopping with squealing brakes when they go red and blowing horns when it goes yellow. Very similar to Mexico City — except the people don’t look as poor as in Mexico and there are only occasional beggars in the streets. You, Gweneth, would love it because there are so many shops (all small) and Carl would love walking around in the arcades and rabbit warren twists and surprises, especially in the old part of town.

Yesterday morning I went to the archeological museum. Michelle would like all the great Greek statues of horses — there is one big one especially of a small boy on a large galloping horse, in bronze, that is a sensation. I saw so much stuff I got all mixed up. It is not labeled well and my feet began to hurt. Also it was slightly boring because we have seen so much of that stuff before. Except for one thing — among all those art objects there was one thing so entirely different and strange that it is nearly impossible. It was got from the sea in 1900 and is some kind of machine with gear trains — very much like the inside of a modern wind up alarm clock. The teeth are very regular and many wheels are fitted closely together. There are graduated circles and Greek inscriptions. I wonder if it is some kind of fake. There was an article on it in the Scientific American in 1959.

Yesterday afternoon I went to the Acropolis — which is right in the middle of the city — a high rock plateau on which was build the Parthenon and other shrines and temples. The Parthenon looks pretty good — the Temple at Segesta that Gwen and I saw in Sicily is just as impressive because you allowed to walk around in it — but you can’t go up and around among the Parthenon columns. Prof. Iliopoulos’ sister came with us and with a notebook she had — she is a professional archeologist — and guided our tour with all kinds of details, dates, quotations from Plutarch, etc.

It appears the Greeks take their past very seriously. They study ancient Greek archeology in their elementary schools for six years, having to take 10 hours of that subject every week. It is a kind of ancestor worship for they emphasize always how wonderful the ancient Greeks were — and wonderful indeed they were. When to encourage them by saying yes and look how modern man has advanced beyond the ancient Greeks (thinking of experimental science, the development of mathematics, the art of the renaissance, the great depth and understanding of the relative shallowness of Greek philosophy, etc., etc.) — they say, “What do you mean — what was wrong with the ancient Greeks?” They continually put their age down and the old age up, until to point out the wonders of the present seems to them to be an unjustified lack of appreciation for the past. They were very upset when I said that the thing of greatest importance to mathematics in Europe was the discovery by Tartaglia that you can solve a cubic equation — which, altho it is very little used, must have been psychologically wonderful because it showed a modern man could do something no ancient Greek could do, and therefore helped in the renaissance which was the freeing of man from the intimidation of the ancients — what they are learning in school is to be intimidated into thinking they have fallen so far below their super ancestors.

I asked the archeologist lady about the machine in the museum — whether other similar machines, or simpler machines leading up to it, or down from it were ever found — — but she knew nothing so I had to meet her and her son of Carl’s age — who looks at me like I was a heroic ancient Greek, for he is studying physics — at the museum to show it to her. She required some explanation from me why I thought such a machine interesting and surprising because didn’t Eratosthenes measure the distance to the sun, and didn’t that require elaborate scientific instruments, etc. Oh, how ignorant are classically educated people. No wonder they don’t appreciate their own time. They are not of it and do not understand it. But after a bit she believed maybe it was striking, and she took me to the back rooms of the museum — because surely there were other examples and she would get a complete bibliography. The complete bibliography was a list of three articles (one in the Scientific American) all by one man, and he is an American from Yale!

I guess they think all the Americans must be dull, only interested in machinery when there are all those beautiful statues and portrayals of lovely myths and stories of gods and goddesses to look at. (In fact the lady from the museum staff remarked when told the Prof. from America wanted to know more about item 15087, “Of all the things in the museum why does he pick out that particular item, what is so special about it?”)

Everyone here complains of the heat — and is concerned about whether you can stand it, when in fact, it is just like Pasadena but about 5° cooler on the average. So all stores close from perhaps 1:30 to 5:30 P.M. (“because of the heat”), which turns out to be really a good idea (everyone takes a nap) because then they go late into the night, supper between 9:30-10 P.M. etc. when it is cool. People are seriously complaining of a new law. To save energy all restaurants and taverns must close at 2 A.M. This, they say, will spoil life in Athens.

Now is the witching hour between 1:30 and 5:30 and I am using it to write to you. Honest tho, I miss you and I would really be happier at home. I guess I really have lost my bug for traveling. I have a day and a half yet here and they have given me all kinds of literature about a beautiful beach (of pebbles) here, of an important ancient site (altho in rather complete ruins) there, etc. but I will go to none of them, for each — it turns out — is a long (2 to 4 hours, only each way) bus ride on a tour bus. No. I’ll just stay here and prepare my talks for Crete (they have me giving an extra three lectures to some twenty Greek university students who are all coming to Crete just to hear me. I’ll do something like my New Zealand lectures — but I haven’t got my notes! and have to work them out again.)

I miss you all, especially when I go to bed at night — no dogs to scratch and say good night to!

P.S. IF YOU CAN’T READ THE ABOVE HANDWRITING, HAVE NO FEAR — IT IS UNIMPORTANT RAMBLINGS. I AM WELL AND IN ATHENS.