We will come to think of interface design as a kind of art form
— perhaps the art form of the next century.

“Hello, how are you?” being written in Dasher. (Hit escape to halt animation.)

A text-entry interface for the tetraplegic, it’s like nothing you’ve seen. Not only does using it have the same rush and exhilaration of playing Sonic WP, it is also unbelievably efficient. And again, sheer fun.

It will take you some 5 minutes to get the hang of it (not out of difficulty, out of profound weirdness) but believe you me, you won’t regret it. Read the quick, 3-page explanation and try the Java version in-browser or download it. It’s free software and there are localized versions in many languages.

If such deep novelty, such striking unreality ELZR lies in something as mundane as text-entry, what wonders lie yon in the craft of interface design? 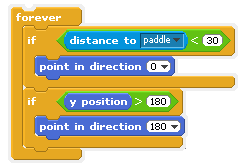 Visual programming has been a perennial pipe dream of mine and just some three months ago the MIT Media Lab unveiled the best embodiment so far of my vague and unspecified dreams. It’s called Scratch and it’s meant to introduce children to computing by giving them easy, programmatic means to media manipulation.

The brilliant breakthrough has been to Lego-fy programming, making control blocks actually, well, blocks, and turning programming into block stacking. Yes, it’s messy and you have to fumble around for blocks but it’s visual, incredibly intuitive, and — get this — syntax error free (since blocks have shapes and will only fit in ways that make syntactic sense).

It was scary, you know, when I first knew about Scratch, just some days after it was launched, my evangelizing streak came back with a vengeance and I felt this strange calling to go and teach it somewhere, wherever. Here was finally an easy way to show “normal” people what programming was. Here it is. 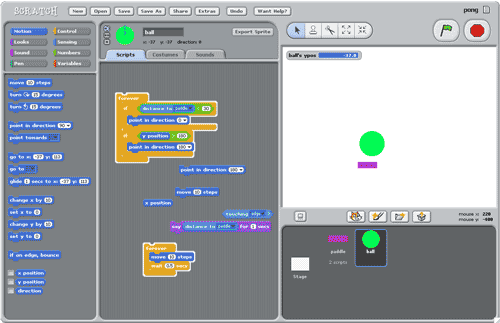