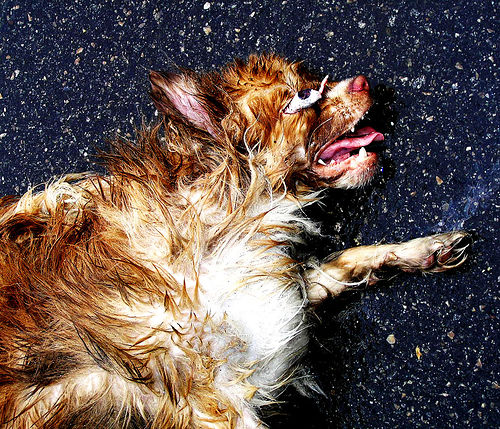 Speaking of dogs, I wonder: if a dog is just about to be ran over by a car and you suddenly save her, would she be aware she almost became roadkill? Would she be shaken afterwards, replaying endlessly in her mind what could have just happened? Would she be grateful? Would she even understand what you just did for her? Could that be as life changing a moment for her as it could be for a person?

More than the past, the present, or the future, our true home as humans is the could. Even more, it is only by reflecting in it the past, the present, and the future that we can see them clearly. A near-death experience — an unhappening in other words — could well be a turning point in our lives, rearranging in one fell swoop our past, present and future. Could matters to us, its phantasmagoria walks among us, and it is or, fittingly, could be, a major component of every single issue that we care about.

One important problem with it is that even if you don’t consider an early fetus alive or aware, by impeding its growth you’re stumping the future possibility of a very alive and aware being. What are the rights of the inhabitants of could? The ingredients of a cake don’t make a cake until mixed and baked but how can a human not look at flour, eggs, and butter and not see the cake?
Consider sex
Imagine we come up with something to prevent absolutely all STDs and unwanted pregnancies (we ain’t far). Would you still think of sex as something sacred? Would premarital sex or promiscuity still strike you as taboo? Would whores or pedophilia or incest still shock you? Would you consider sex as just one more source of meaning and pleasure, like, say, food? Next time you are shocked by something sexual consider this and realize how much of your shock hinges on pregnancy and STD considerations.
Consider death
What if, as has become increasingly likely the more we learn about biology and our bodies, we could stop it or at least hold it at bay much, much longer? What if we could reverse aging? Doesn’t that possibility merit our consideration? Shouldn’t helping this research or at least knowing about it be one of our top priorities? Who among the death scarred won’t cry could tears if the day comes when it becomes clear that death is not only defeatable but could have been defeated — should have been defeated — decades, centuries ago?

(It is, by the way, my fascination with could that makes me a fan of science fiction and fantasy — could’s official literatures. Even more than sensawunda I crave sensacould.))