Esperanto is full of them, based on them really. Chinese writing is like that too, at times — I’m particularly impressed by things like å¤§å°?, literally “big”-“small”, used occasionally to mean “size”.

One problem that comes up is is that no matter how small the root words, compounds eventually get unwieldy, even to express simple ideas. In Esperanto, for instance, supr- is the root for “up” and you attach the -en directional root to make supren = “upwards”. Using the inverting root, mal, you get malsupren = “downwards”. So you end up having to say the clunky malsupreniri to express the simple “to go down” verb (iri = “go”).

One very elegant solution mentioned in Claude Piron’s wonderful La Bona Lingvo (“The Good Language”) is to take a different, simpler track altogether. The same idea of “going down” can be more elegantly expressed as desupri, literally “to from-top” (and the corresponding alsupri, literally “to to-top”). This, to me, is the stuff of beauty.

I recently learned 2 new Japanese words, fascinating to me because they used an entirely different conceptual track to the one I knew. You see, the Yamanote line is Tokyo’s most important train line and, remarkably, a loop. Japanese refer to trains travelling the loop clockwise as å¤–å›žã‚Š, literally "out"-"go around", and counter-clockwise as å†…å›žã‚Š, literally "in"-"go-around". In Japan, trains, like all traffic, travels on the left and so these words make wonderfully creative, precise descriptions. (This is done, though rarely, in Western countries too, I later learned.)

The problem with these words is that they’re specific to Japan’s traffic regulations — they would confusingly mean the opposite in much of the right-driving rest of the world.

So, inspired by the Japanese track, I decided to create more universal words for clockwise and counter-clockwise, words which always confused me as a child and which aren’t particularly wieldy (in Spanish, the equivalents truly weigh you down: clockwise = "en el sentido de las manecillas del reloj, counter-clockwise = “en el sentido opuesto de las manecillas del reloj”). Fun historical note: clock hands move the way they do because that’s the way clocks’ predecessor, sundials, advance — sunwise that is (in the Northern hemisphere).

Thus I present to you rightcenter, meaning clockwise, as in “clock hands move rightcenter”, with the center to the right, in a right center way. As well as leftcenter, meaning counterclockwise, as in “screws are usually loosened leftcenter”, circling with the center to the left, in a left center way. Their derivation, I hope, is made even more obvious by the following diagram: 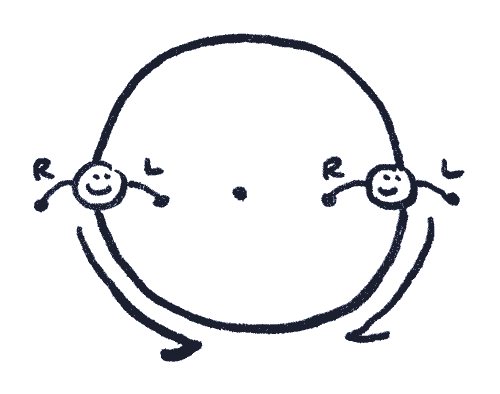 Now, I make no illusions that these terms are immediately or intuitively graspable — spatial direction is hard, most of us still have to consciously think about telling right from left. These words are just an alternative, fun way to label (and thus think) about the concepts of circular direction — and to think about language itself.