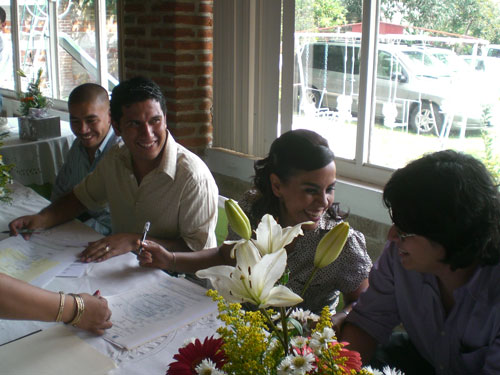 Some days ago my cousin Cris got married to Julio in a beautiful, simple civil ceremony. They’re having a (huge) Catholic ceremony come December but as of that Saturday they’re already husband and wife. It was the first time I got to see a civil wedding (in Mexico, they’re usually done privately, shortly after the religious service, a furtive formality between the mass and the party) and since I was Cris’s witness, I even took part in the ceremony itself. I loved every minute of it.

The lunch — delicious carnitas ^ WP, F ^(we all ate too much)) — was held at the family’s over-used reception room and most of the guests were either bride’s or groom’s family (each, as tradition has it, at opposite sides of the room) with a small contingent of the couple’s mutual friends (all looking disturbingly middle-aged from my vantage point). Chemito superstar came from Monterrey in a one-day round trip and got the bride crying :)). Most anyone looked stunning. Most anyone looked happy.

The party would extend well beyond sunset with the polemic smuggling of a TV to watch the Chivas-America soccer classic and the road back home would prove an adventure onto itself owing to treacherous potholes and a monsoon, but it was the actual signing of the marriage contract that so impressed me that day. On one level, of course I was excited and bewildered and happy that Cris was (finally1!) marrying. And it was the first time it happened to someone so close — all weddings before I felt an spectator, only indirectly related to the bride or the groom.

The judge arrived, the music stopped, and we all gathered around a simple table where Julio, Cristina, and their witnesses sat — everyone expectant. The judge declared the ceremony started with a sibilant, annoying voice, asked the parts to the contract if they had come on their own will (no dramatic “Speak now or forever hold your peace.” though), and proceeded to read a long, overly politically correct text that is still a marked improvement from the 140-year-old anachronism that used to be mandatory at weddings (turns out that was only discontinued 6 months ago). They were then asked to read a brief formulaic statement to each other and finally, in a great anticlimax, bride and groom, and later their witnesses and their parents, got to sign a seemingly endless string of documents amid nervous laughs. The judged pronounced them husband and wife (“…in the name of Law and Society”), the ceremony was over, and in a roar we all came tumbling down to congratulate the newlyweds, tears sprouting all over the place.

So you see, it was actually a very simple affair — and yet dramatically different from a religious ceremony. To begin with, it felt unbelievably more intimate to me. Yes, I was the witness and I was there at the table and I loved the bride and all, but I still think people all over felt very much more involved, standing at arm’s length around us, smiling and crying at the happily terrified couple. The ceremony may have sounded formal, it was, but that’s nothing compared to the rote convolutedness of a religious service. It pretended to be nothing more than the signing of a human contract — which is, of course, what it is — and I delighted in such simplicity — it felt so unadulterated, so raw, so human. Alas, there was still, to be sure, the specter of the State all over the place2, but I was so cheerfully entranced by the absence of God that I didn’t notice it then. I was happy.

1 They went out for over a decade!