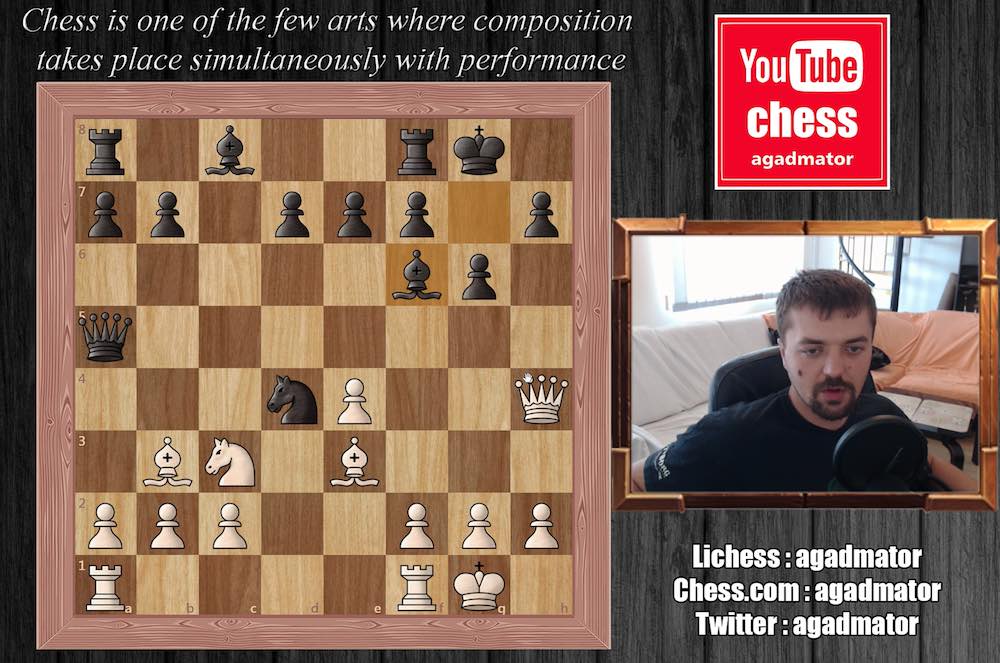 Last year I got a bit back into chess thanks in part to discovering YouTube chess commentators like Agadmator. I’ve never gotten far into the game but it was surprising how enjoyable & instructive it was to watch great games re-enacted with insightful commentary.

Staring at 2d boards got me thinking about the pieces & their movements. 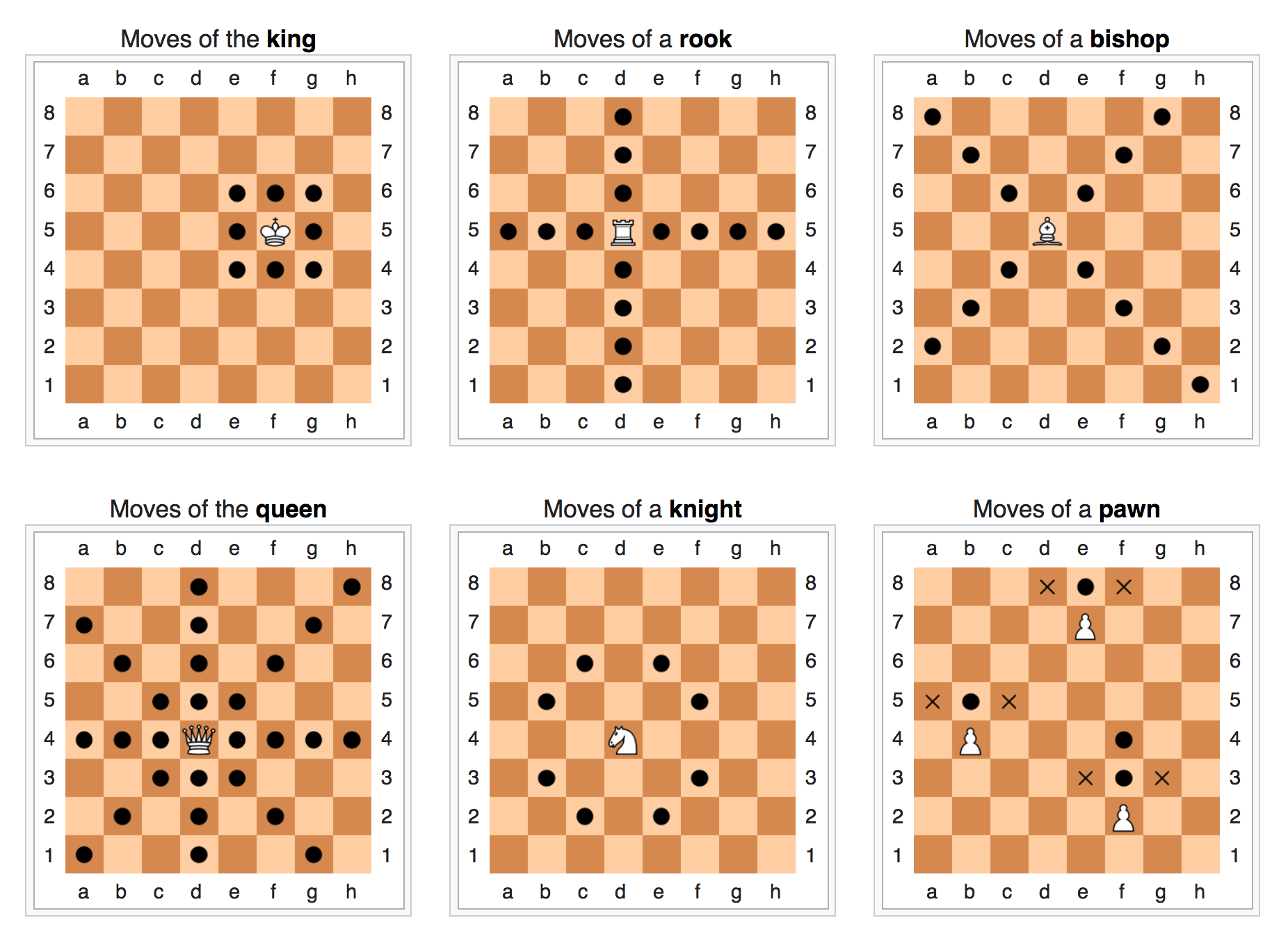 Wouldn’t it be nice if the symbols we used for the pieces could exemplify their defining movements? Something like this perhaps: 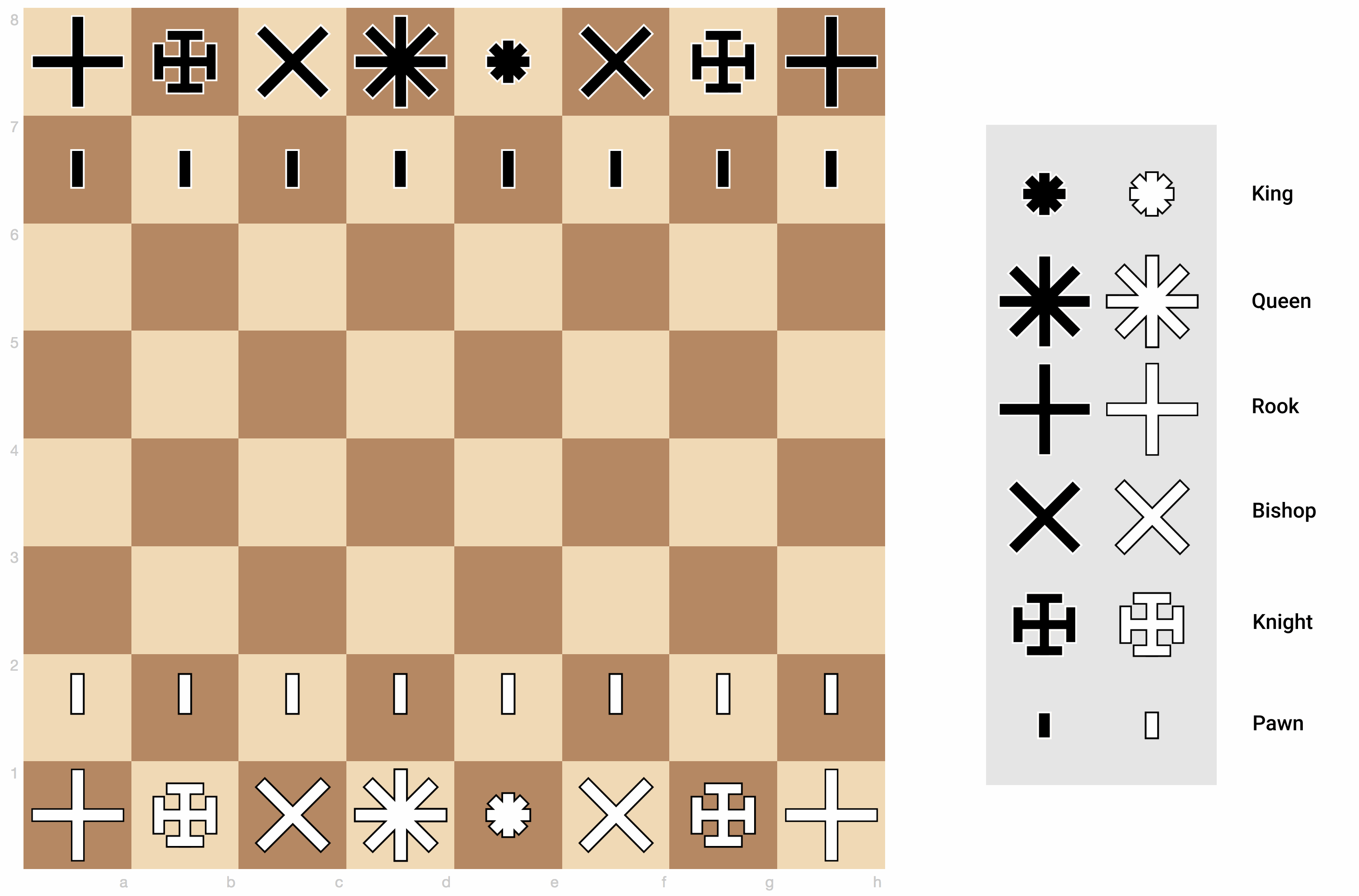 I’ll confess I’ve never much cared for the standard design of 3d chess pieces: only the knight & tower are dramatically vivid, the rest (pawn, bishop, queen & king) are somewhat bland crowned pedestals that always blur together in my mind. But the pieces are nice to handle, nice to touch, and their differing heights (pawns are the lowest, the king’s the tallest) are an elegant use of 3d to make each piece & the board more understandable. 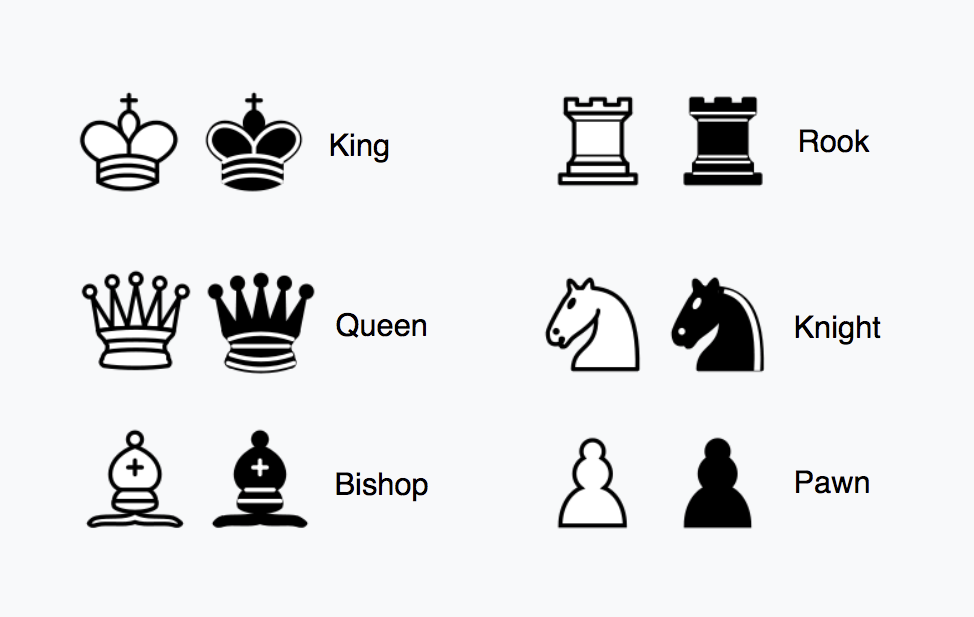 Height difference is lost in 2d translation and some shapes are distilled into pure headwear: king & queen are crowns (I always confuse which is which), the bishop is a mitre with a weird base. The pieces become kitschy hieroglyphs, with a deep historical connection to be sure, but in play mostly just unhelpful, undifferentiated blobs. 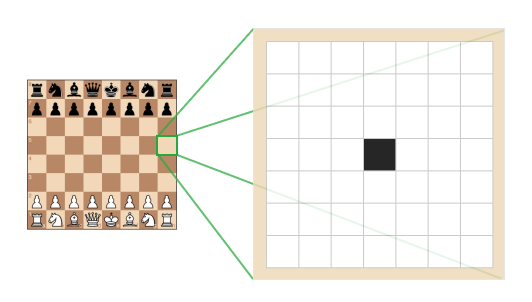 We start by taking a square of the board, allowing for some margin around the edges so pieces won’t touch and then self-similarly splitting the square into a 7×7 grid of squares. Why not 8×8 like a full chessboard? Partly because 7×7 is just enough to hint at the differing movement patterns but more importantly because even-sided grids have no one-square center. That matters because all our pieces will be filled at the center, which will stand for our piece.

Pawns have (apparently) the simplest movement pattern: 1 step ahead. Except that their very first movement, and only that one, can be 2 steps ahead. So perhaps we could take advantage of our pieces being digital and reflect this special step-change of pawns in their shape by “shrinking” them after their first movement. 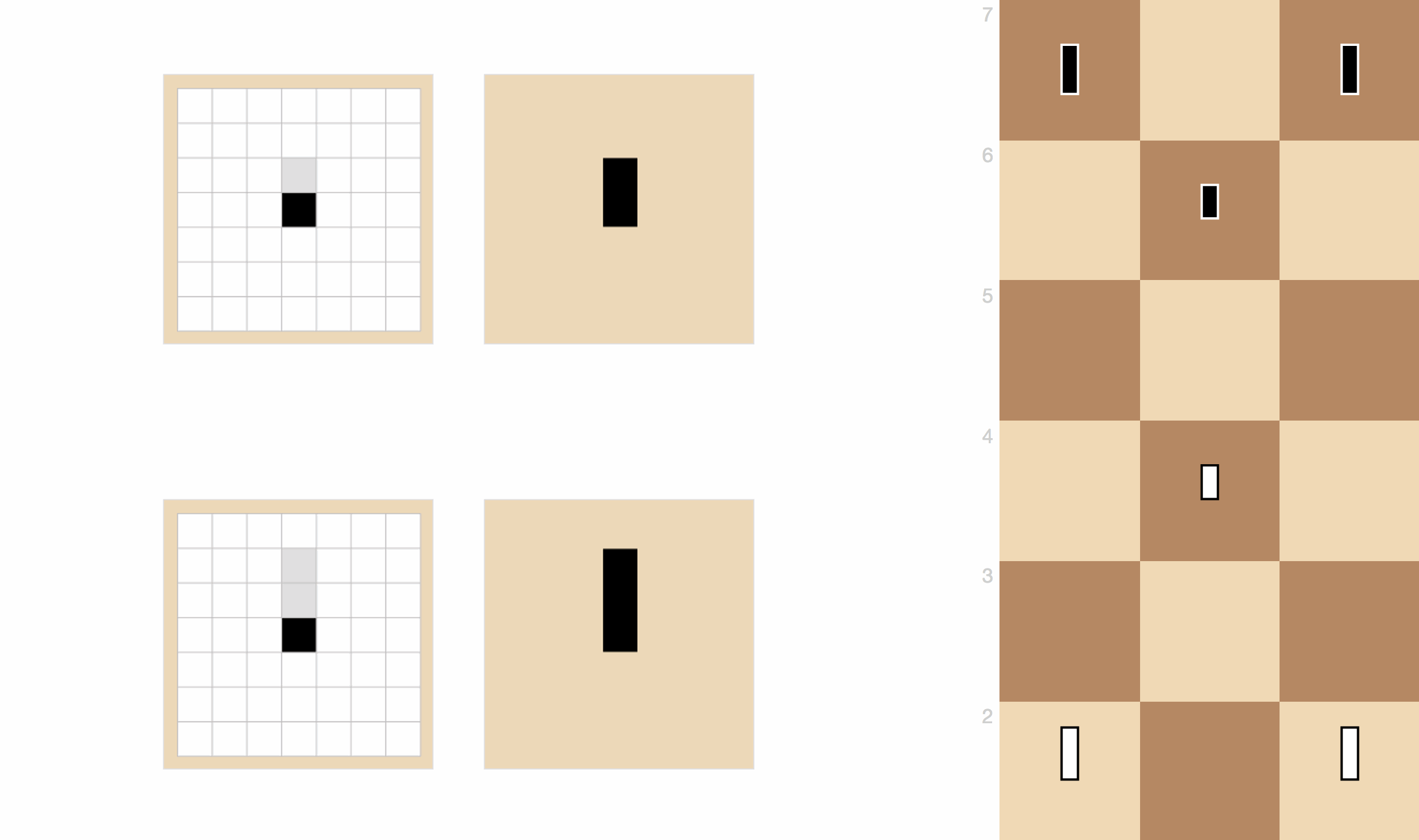 The related en passant (“in passing”) capture could also benefit from a slight shape-change to indicate that the pawn can, in very special circumstances, suddenly move diagonally one step. Notice how I’m using a slanted line instead of a jagged mosaic, a design choice I’ll repeat henceforth since it makes the movement diagram into more of a single bouquet of arrows than a mosaic of static points.

All these case-handling may seem finicky, but such are the rules of chess and this way, the shape of pawns is (subtly) tracking this minor complexity for us. 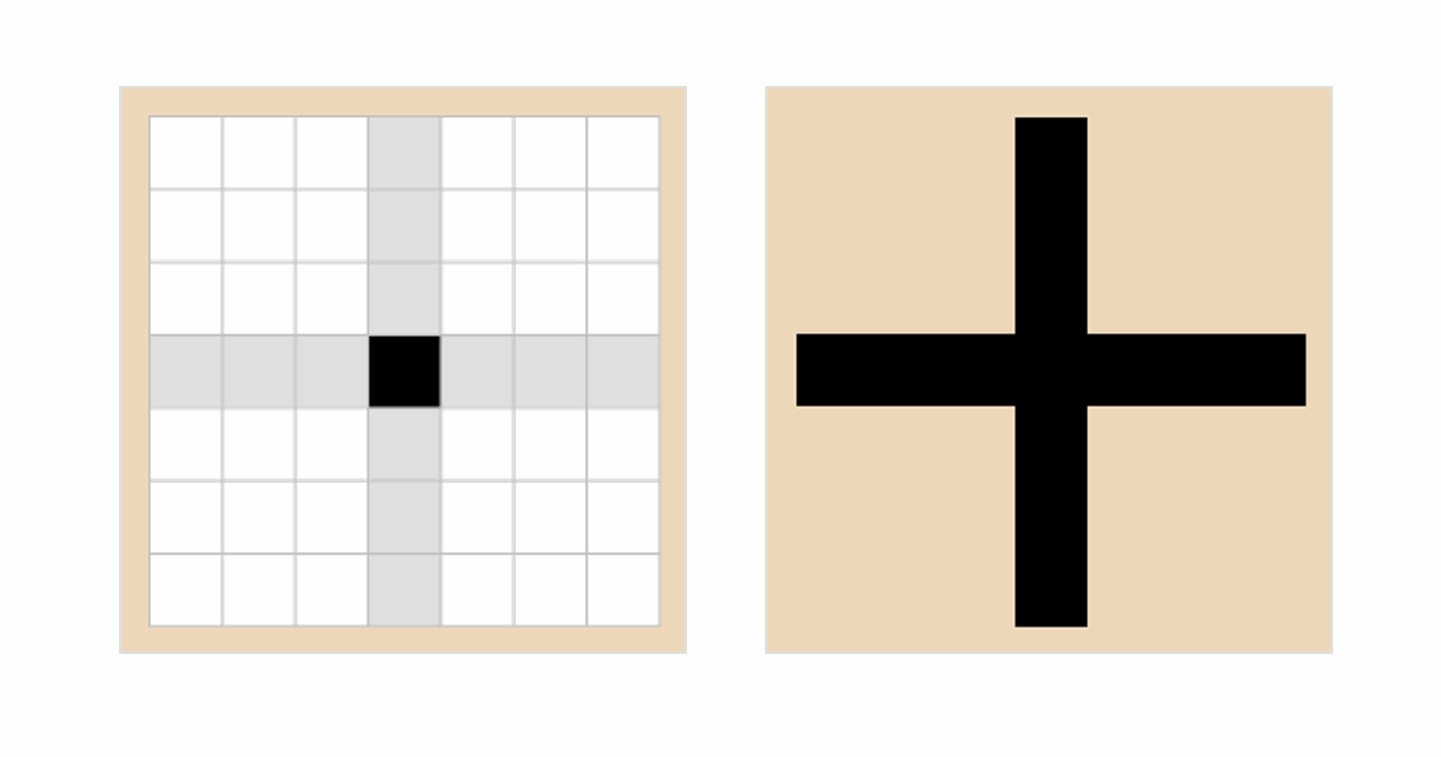 Rooks can move sideways or front/back, as many (unoccupied) steps as they want. We’ll represent that freedom with 3-square lines and thus a straight cross. 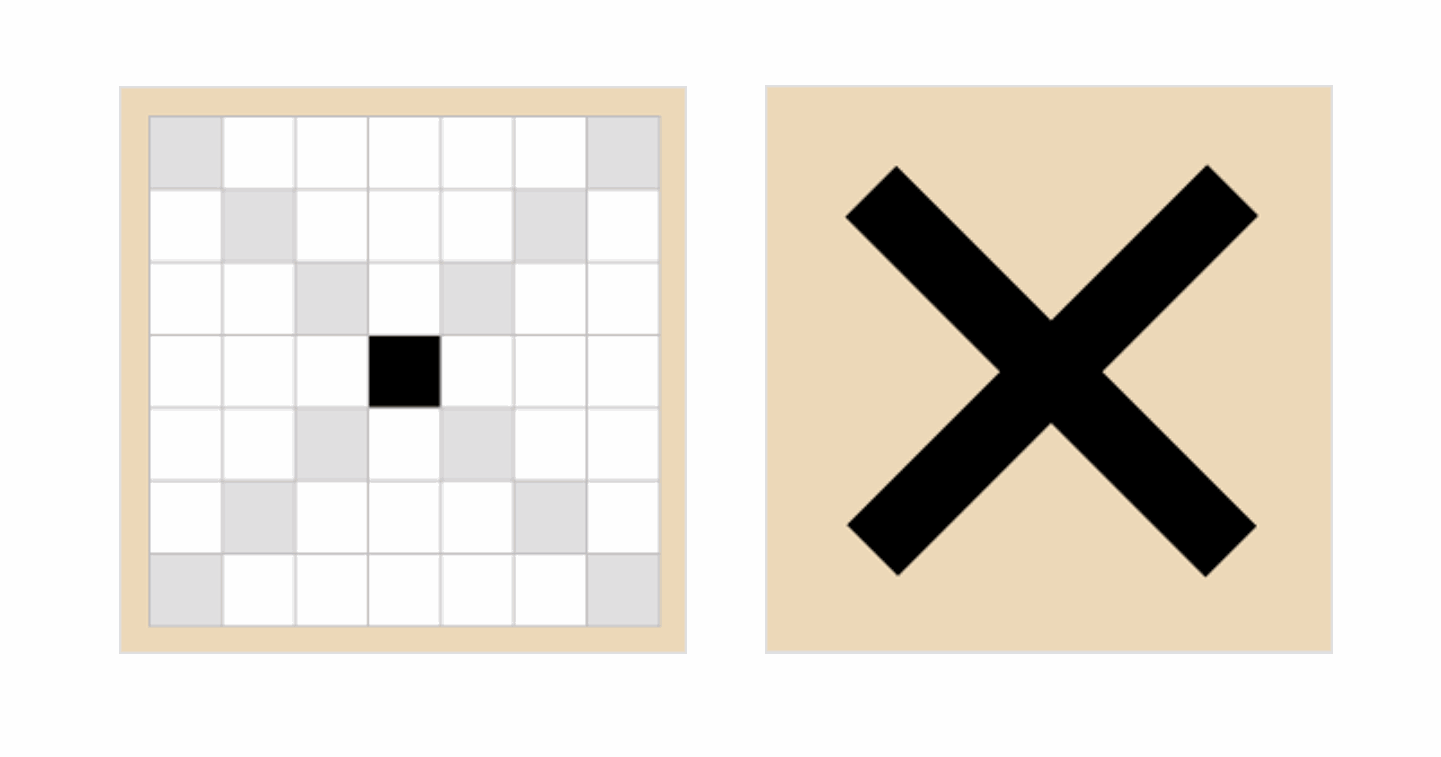 Bishops can move diagonally (and only diagonally) as many steps as they want, represented by the same 3-square lines —a diagonal cross! Notice how the duality between rooks & bishops is represented visually by making one a 45 degree turn of the other. 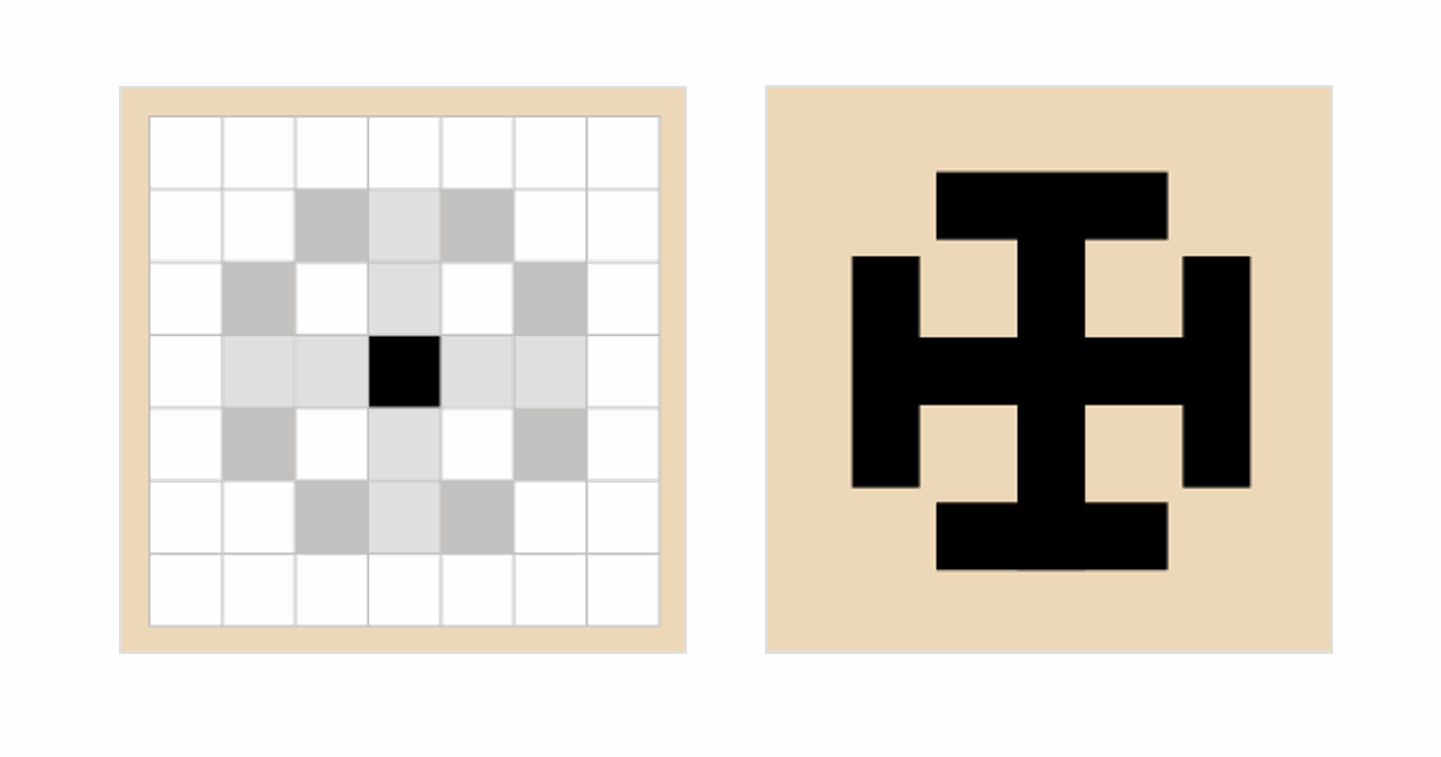 Knights move in odd L-shaped movements and can, uniquely, jump (with their horses!) over occupied squares, though they must land on unoccupied squares.

Strictly, knights have at most 8 places to move to, but, again, to make the movement pattern more like a connected, graspable figure than just points, I represent it with an L-cross (which because of symmetry is not a swastika, it’s a T-cross). I also take a bit of design liberty to not have the tips touch. 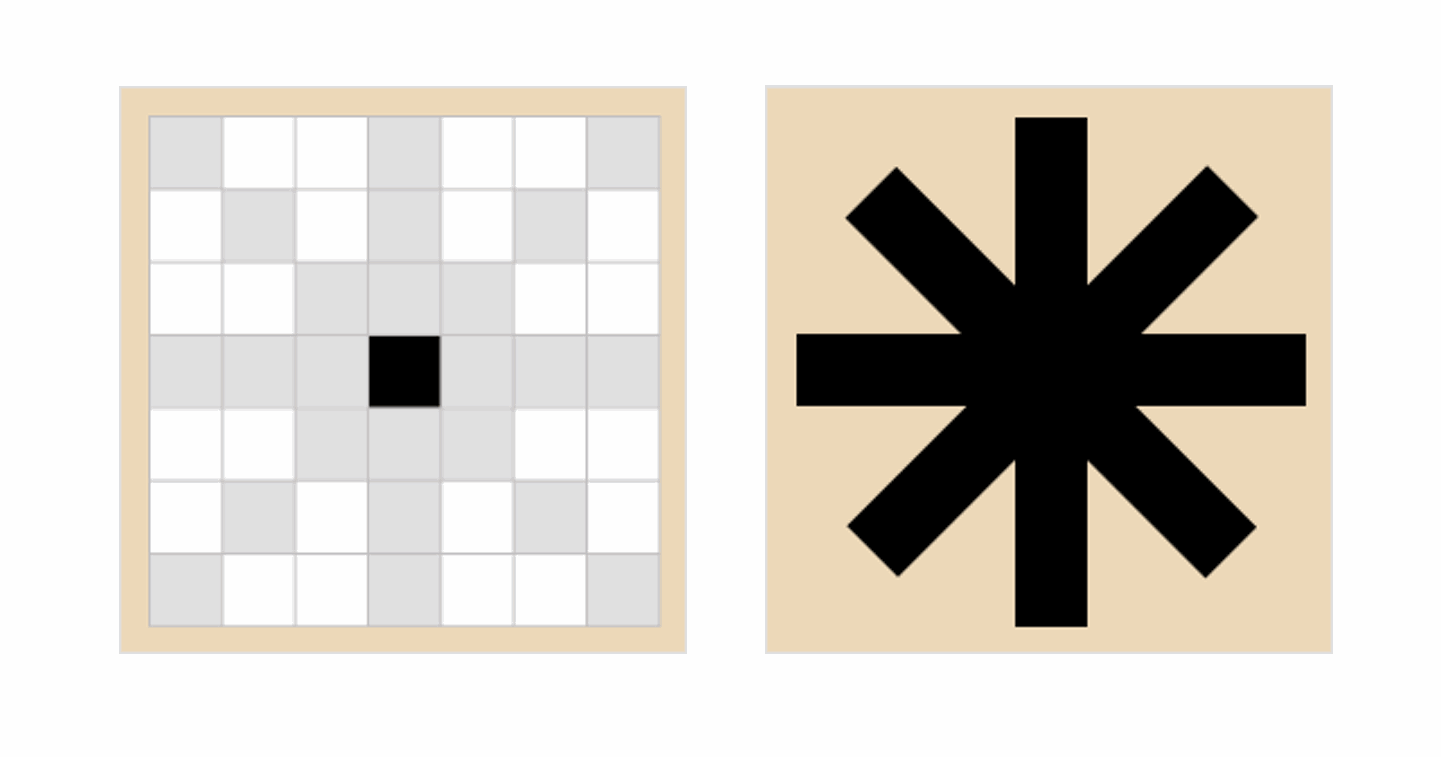 Queens are the most powerful piece, being able to move in all (unoccupied) directions as much it wants. It’s represented by a big star in all 8 directions. 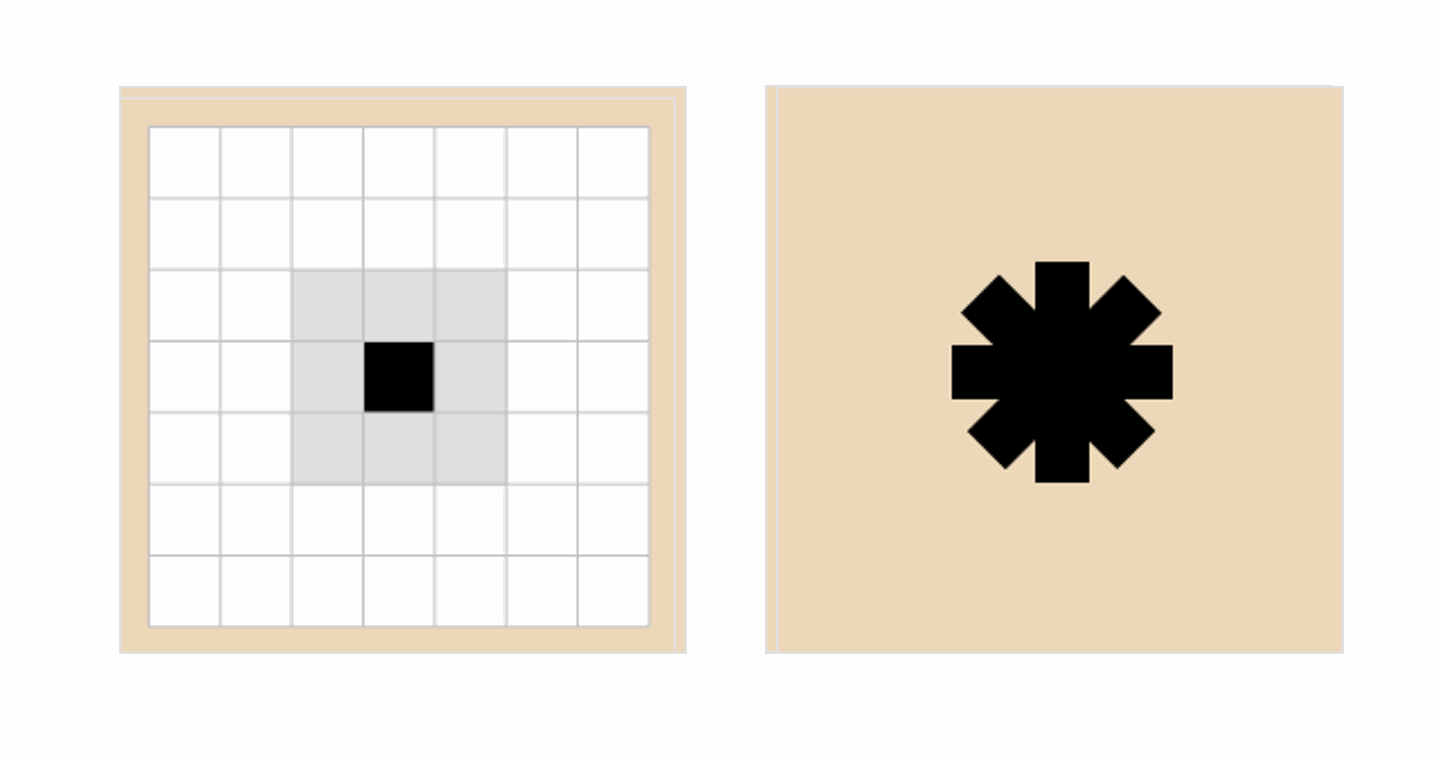 Finally, the crucial kings can move in every direction, but only in one timid step at a time. It is thus represented with a small star.

Here’s everyone together again. Except for the forward-only pawn, all pieces are symmetric crosses. Pieces are easy to tell apart and magnitude roughly corresponds to importance in the game (except for the king, which is the singularity that determines the game).

Thanks to the magic that is chessboard.js this board is actually playable. Go along, drag the whites! (I haven’t yet implemented the pawn logic though, all of them are always 1-step long.)

Am I really so feeble-minded to need such crutches? Might be. At times, definitely. Though it’s noteworthy how often design aids can assist a wide-range of abilities: like how sidewalk ramps help those in wheelchairs, careless pedestrians who might otherwise trip, and cyclists.

But I’d rather end this making a different case than usefulness for these pieces: making them was fun and I find a strange self-similar beauty in them. I enjoy being surrounded by cooperative self-exemplifying symbols, whispering to me of their meaning with their form. They have an unusual harmony, the opposite of the dissonance of the Stroop effect (where color words dressed in mismatching colors are shown to interfere in your grasp of them). 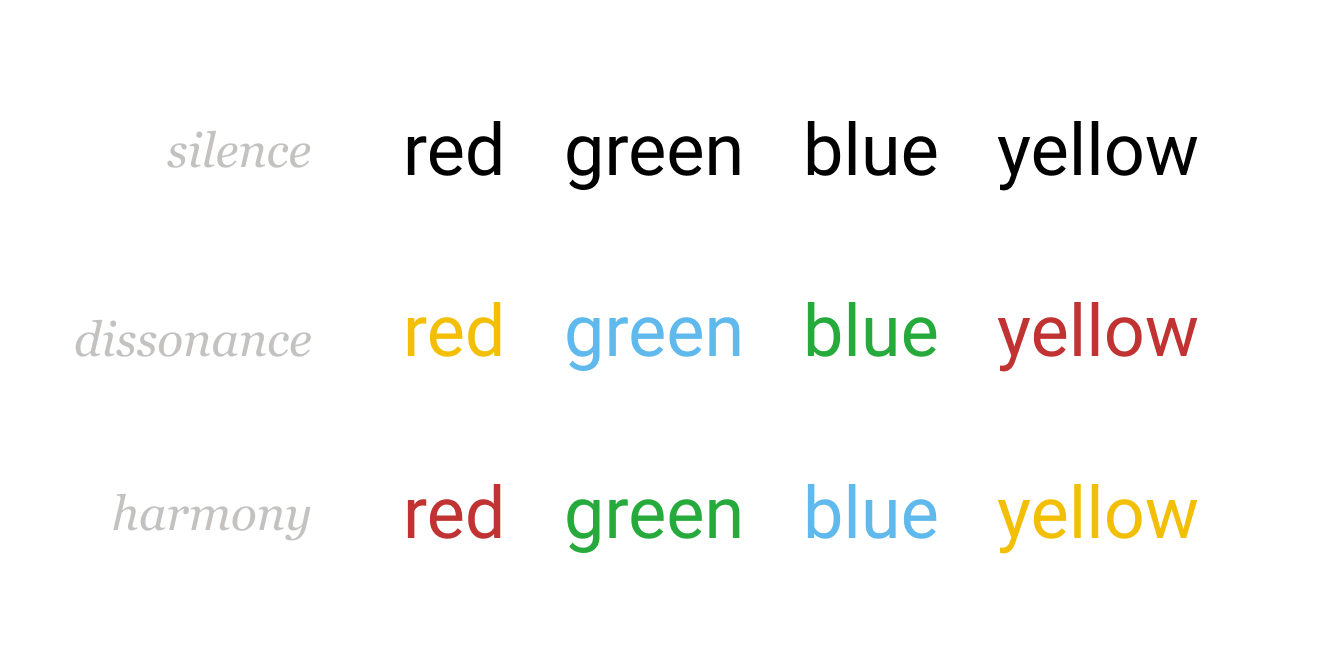