Blogs are comics (wikis are movies)

Scott McCloud begins Understanding Comics AM wrangling to create a definition of comics, contrasting it with pictures and movies. Taken individually, a picture is merely that, a picture. Arranged sequentially however, pictures are transformed into something else. If the sequence is temporal — pictures alternating in time, fixed in space — we call that art movies. If the sequence is spatial — pictures adjacent in space, “juxtaposed” — we call it comics. 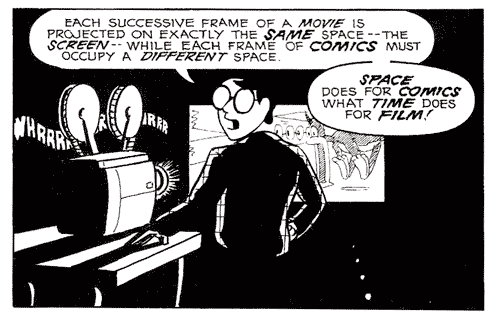 So that’s that. His is a great book and you won’t regret reading it, but for now hearken back with me to the web before blogs. There was, in such olden times, something called the «personal homepage»: primeval websites where people put their disjointed personal trivia for the world to admire. (See An Exploratory Profile of Personal Home Pages: Content, Design, Metaphors.)) They were usually boring, disorienting, and self-flattering (think photo albums) but there had been nothing like that before, not on this scale — you could learn about fascinating people you’d otherwise never meet and there were some unbelievable things out there. But back to the photo album metaphor. Personal homepages were piles of scattered, assorted personal paraphernalia — they were, in a way, photo albums. 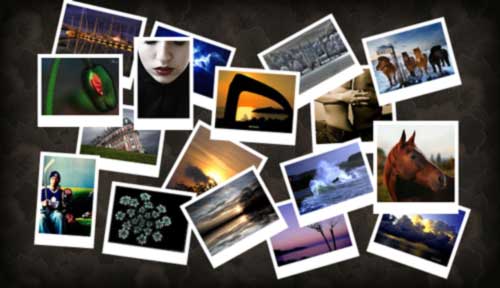 A photo heap. Intriguing at first but quickly unmanageable and unwieldy.

Then the blogs started to appear. It took a while to notice anything had changed. The diary metaphor obscured as much as it enlightened. With some hindsight it’s easy to pinpoint what happened — and to marvel at how simple yet radical a change it was. The blog era is when websites learned about sequence, spatial sequence. They stopped being fractal trees of buried content and became, yes, comics — post became the new panel.

By spatial, we mean that blogs, just as comics, unfold in space. There’s a post and right below it there’s another, further below, another, and so on. It makes as much sense to talk of a “blog strip” as of a “comic strip” — about the only difference is that the former goes from top-to-bottom while the latter from left-to-right (or right-to-left).

And then there’s sequence. Sequence brought context, interface and development to websites, it gave them personality, motion, and tension, made them subject to change and thus to evolution. Sequence brought time.

Every page in a blog has a natural context: it comes after the previous post and before the next. A blog’s homepage is simply a broad sweep of the most recent posts in the strip — an easy way to glimpse the website’s personality and recent happenings. If you’re faithful (or diligent), you can see the writing and the themes evolve through time. The mind fills in the gaps, the bleeds, and the continuity that emerges can feel as real and intense as reality itself. Spatial interface is a brilliant interface in its almost ridiculous simplicity.

(Blogs are the web’s poster boy for spatial sequence but they’re by no means the only ((or the first) web form to avail itself of it. Comments, within blogs and beyond, are also spatially sequenced, are also comics. So are forum threads.))

What, then, is the equivalent of movies in the web? What web form is temporally sequenced — “pictures” alternating in time, fixed in space? The hard part, really, was coming up with the question. The answer is obvious: wikis.

Consider a popular pedia ELZR (Wikipedia article). It’s the product of a myriad interventions (most of them rather trivial) from several Wikipedists, but you are only seeing the most recent frame when visiting the pedia’s URL. If you visit in a couple of hours, chances are someone corrected a typo, reverted vandalism, or added a sentence, and you will thus see a slightly different frame — the pedia has “moved”! Unknown to a surprising amount of users, every pedia has a history where a log is kept of even the most minute change — the movie’s celluloid film. Wikis are movies.

Time-lapse bloom.
Compare with the Time-lapse pedia and its history.
← Finally, a mac!It's not the post, but the sequence →
Follow me on Twitter!  |  Back to ELZR.com