An essay on Riya

There’s something deep about Riya, the new image search engine, that bugs me. It reminds me a lot of a group in my university that was developing a digital whiteboard back in 2002. It was a fascinating technology, and, these being the days of Minority Report WP, IMDB, I was infatuated with the possibilities. The thing was expensive and bulky, but allowed for some really sweet, unprecedented interaction with the computer not that far from those of said movie. 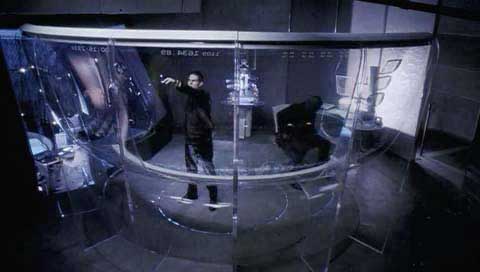 And yet, everyone in the center was only interested about handwriting recognition, the juicy engineering problem. Many doctoral thesis had been spent on that can of worms and it was still as unreliable as ever. Well, not quite, there had been improvements, to be sure, but we’re so magically good at such pattern recognition that we set very high standards for it.

But my point is that they were missing on an incredible new tool because they obsessed on the wrong problems. It was (and remains) a whole new interaction mode, with an immense gamut of unexplored possibilities and uses — there were beautiful unheard-of interfaces clamoring to be developed — and yet, when they looked at it they only saw that it didn’t do good handwriting recognition.

On the other hand, of course, as a singularitarian I do believe such pattern recognition problems will be solved sooner rather than later, and I’m sure they’ll eventually blow my and everyone’s mind away. OCR is now a fascinating, practical technology I use almost every week (I’m a quote maven); tablet PCs are not half bad at recognizing your handwriting; the computer system at my high school can easily (and spookily) read and approve the hundreds of license plates of the vehicles trying to enter every hour; and there are now “underwater vision systems for swimming pools that function as lifeguard assistants.”

So one shouldn’t dismiss pure, obsessed engineering. But it still seems somewhat twisted to focus on the hard abstract problems when easier, more important ones lie painfully unsolved.

My personally preferred approach to pattern-recognition problems, whatever the state of the digital art, is, naturally, human-computer symbiosis: trying to do wonderful things with what you’ve got by compensating digital dales with human hills (and viceversa). Perhaps the best example of this has been Jeff Hawkins and his series of handheld devices. The original Palm Pilot WP introduced a groundbreaking idea, at first ridiculed: Graffiti WP. A new alphabet designed to be easy to recognize, it used our extraordinary ability to learn new symbols to make the handwriting-recognition problem tractable. And when eight years later the Treo WP PDA/Cellphone arrived, it eschewed handwriting recognition altogether for a small keyboard. Treo users would need to do more serious typing for messages and Hawkins recognized that we are far better at opposing our thumbs than at fiddling with styli.

Do you guess what’s then the single most important factor in human-computer symbiosis? That’s right, the interface. Everything revolves around the point of contact between human and computer, and consequently, there’s nothing more basic and more crucial to the success of the symbiosis than interface design. And there’s the pea that had been bothering me about Riya since I first found them some months ago: the interface of what should practically be an interface company (to my extremist mind) is a mere afterthought.

Their current homepage is the winner of a halfhearted contest the CEO whipped up in his blog and it shows. It’s better than the previous thumbnail smorgasbord, but now its just a bad, bland clone of Google Images. And the presentation of their search results is mediocre and confused. Though one can vary the number of results per page (from 20 to an overkillingly humongous 500), most screen real state is wasted on empty, meaningless borders and margins around thumbnails and a not-so-useful sidebar that I can’t hide. In screen-intensive applications — like image searching! — a sidebar, as opposed to a topbar, is most likely a no-no (you’ve to at least make it hideable) because one scrolls up-down, not left-right, and thus can’t skip it.

The design isn’t liquid, that is, it doesn’t refit itself to my window, displaying only 4 thumbnails per row and wasting more than half of my 23" screen. Google Images recently adopted (finally) a liquid JS design. Even if suboptimal, it does make a difference.

Continuing with Riya, no indication is provided of the full-size image true dimensions, one of the most important variables to an image searcher (though most Riya images seem to be medium-sized). More gravely, the thumbnail quality is low — a major, unpleasant faux-pas: resolution is perhaps the major variable for conveying visual information, an image search engine can’t afford to dismiss it.

Bicubic-quality thumbnail,
you can now make out the text

But most surprising of all, Riya follows (apparently out of sheer inertia) the reigning unnatural paradigm for displaying full-size images: breaking the context and unnecessarily taking you away to a different page. To put it bluntly, this is pure evil :)).

If the visual task is contrast, comparison, and choice — as so often it is — then the more relevant information within eyespan, the better. Vacant, low-density displays, the dreaded posterization of data spread over pages and pages, require viewers to rely on visual memory — a weak skill — to make a contrast, a comparison, a choice.

What makes it particularly surprising is that Riya has no reason I can think of to do this. They don’t have to be good netizens and refrain from hotlinking — like Google and Yahoo! have to — because they currently host the images themselves. And it’s not like they are skimpy on bandwidth (remember the 500 thumbnails per page?). What’s more, Riya can’t even mock-argue in its defense that it breaks your visual context to show you another context, that of the page the image’s embedded into — again, like Google and Yahoo! can. Riya interrupts you needlessly, apparently only to show you a set of dubiously useful features that could be better presented in situ. 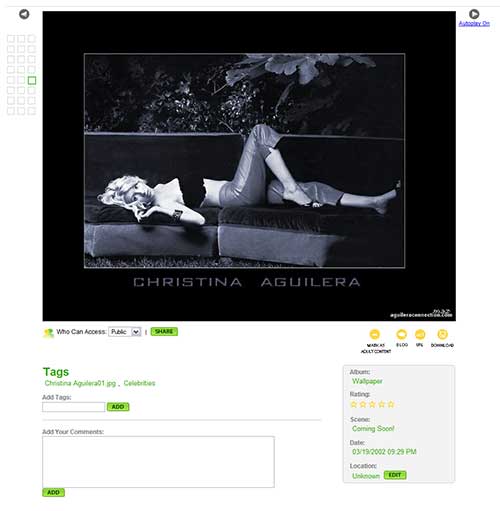 It’s baffling, Riya could make this a killer competitive advantage, if it only dares to innovate — if you want to see what a difference same-page image-viewing makes, check out Imagery, my proof of concept that image-searching can be improved.

There are many, many other little and not so little problems with the page, but, like those that I’ve so far written about, they generally touch only upon general image-searching issues. Part of it is that effectively using Riya’s unique value-proposition, its face-recognition algorithm, is a whole nother story, requiring a keener analysis and knowledge of Riya than I now have, and, I suspect, much more subtlety and ingenuity than the proposed features of search by color, sketch, or similar-image.

But the other reason for dwelling on general image-searching issues is that I want Riya, who has only recently changed course to enter this market, to realize what a fascinating, unsolved problem plain image-searching still is and how it consists of many more vertices, some arguably more important, than pure engineering craft. Face-recognition is a nice ace to have up one’s sleeve, but it’s only the beginning; if Riya wants to become a player in this arena — and I believe it can — it must first understand more deeply image-searching and the flaws and limitations of the current status quo.

I only spent hours writing this essay because of Munjal Shah’s, Riya’s CEO, unique account of Riya’s first 60 days. I was touched by his candidness, by his sincerity, by his willingness to expose himself vulnerable. I was impressed with his careful attention to the responses his multiple-post account generated, with his courageous acceptance of the criticism that sometimes ensued, and with his willingness to openly ask for help. And so, during the three days that took me to read and chew the material, I started researching about Riya, playing with the website itself, and thinking about it. When I finally finished his narrative I had so many ideas and cared so much about the whole thing that I felt compelled to write something back.

But anyway, you should really read his story. As I said, they are a unique, engaging account of one startup’s earliest days. Here’s a makeshift index of the posts you need to read:

Other related posts to complement your Riya digest: