A piece of Peirce 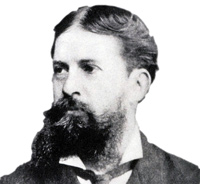 Charles S. Peirce has been called by Britannica “the most original and the most versatile intellect that the Americas have so far produced.” Bertrand Russell considered him “one of the most original minds of the later nineteenth century, and the greatest American thinker ever,” and Karl Popper goes all out, seeing him as “one of the greatest philosophers of all times.”

I just met him a couple of weeks ago and I couldn’t be more impressed: the man’s a fricking genius, practically inventing semiotics and modern logic, making major contributions to the philosophy of science and epistemology. I would remember him forever just for his offhand naming of math as the “hypothetical or conditional science.” (the could science? the moot science?) and I have the sneaking suspicion that ours will be a lifelong acquaintance.

How not to be intrigued by a man who could explain reason in a sentence?

For reasoning consists in the observation that where certain relations subsist certain others are found, and it accordingly requires the exhibition of the relations reasoned within an icon.

Charles S. Peirce, On the Algebra of Logic: A Contribution to the Philosophy of Notation (!)

And to finish this Peirce appetizer you must check out Peter Skagestad’s Thinking With Machines article. He gives a summary of Peirce’s semiotic to make a most intriguing comparison with the thought of human intelligence augmentationists like Doug Engelbart ELZR. Fascinating stuff really.