. More has passed in these ~2 weeks than in months before. Even more surprising is how social (!?) I’ve been and how diverse are the things I’ve been working on. I used to be happily monkish: monomaniacal, a bit of a recluse. No longer.

There are not 2 big projects going on in my life but 5!

Opportunities have been sort of bubbling up naturally and I’m trying to seize them. I’m trying to be open, flexible and opportunistic. I’m working hard but in incremental, focused batches, making many small adjustments or testing new things and letting them play out. I’m trying to weave everything that happens (and has happened) into a thread towards where I want to go, instead of narrowing myself to only see my goal, with everything else as a distraction or an obstacle.

I spent last week in Mexico city. Much to my surprise I had never enjoyed it so much, despite having lived 8 months there in 2012. It felt like what my best trips to the developed world have felt like. Turns out the best way to meet new fascinating people is to know fascinating people already. One particularly memorable day I had a long conversation at breakfast with a brilliant old friend, at noon a long introduction & brainstorming with a new colleague, then a long wonderful dinner and walk with a new friend, and at night a 4-hour long seminar. All 4 conversations magical. My days are not usually like this

And my time here in Guadalajara has been similarly dense and social.

The blag now has comments, an original coherent design that’s still evolving, and some formatting flair.1 There’s now pagination and a list of all posts,. The blag (re)started as completely static, handcrafted handwaving, but it’s now being assembled by my own static generator (inspired by Middleman, Jekyll and Sinatra). Soon it will all be on Github (code & data).

The posting schedule, however, has proved unsustainable. I’m not used to meetings and deadlines but these past few days have been full of them. I experimented with public drafts but I think that was confusing to readers and definitely too stressful for me. So I want to experiment now with a public rhythm instead. The goal is for the ratio of pages/days-since-September-1st to be equal or above 1, but this way I can “recover” from under-writing spells and “save up” on rhythm in over-writing bouts. The rhythm is currently 0.66 and is shown at root and at blag. 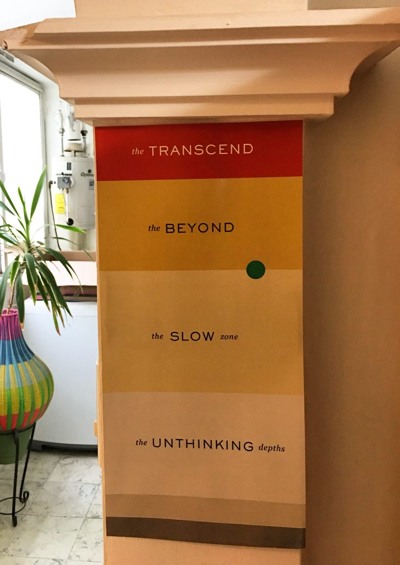 For about 4 years (since I moved to my flat), I’ve had a Zones-of-Thought poster I made up on a column by my kitchen. In Vernor Vinge’s wonderful conceit, space stands for development and the galaxy is divided into concentric spheres that allow for differing maximum levels of possibility: the Unthinking Depths at the core can barely support biological intelligence, the Slow Zone has present-level tech but no further, the Beyond has “magical” technology like AI or FTL, and the infinite Transcend is inhabited by incomprehensible (weakly) godlike Powers.

I’ve been in love with that setting since I first read it and sometimes I like to use it as a metaphor for life . The Unthinking Depths are the cruel poverties where scarcities, of any kind, crush thought. Middling (though happy!) lives are lived in varying degrees of the Slow Zone. What the Beyond is has never been entirely clear in my mind: a place full of light and wealth, financial but also a wealth of relationships, experiences, impact & meaning. The Transcend would be genius.

For years I’ve had my symbolic location (the dot on the poster) stuck at the edge of the Slow Zone and the Beyond (though there has been some cometing through the Beyond as well as plunges to Unthinking Depths). The trajectory of these days feels like advancing straight into the Beyond.

1 I tried to use Markdown as part of the push to start from scratch and upgrade but that only made me appreciate Textile more. I’m also using my own parser & syntax for things like lowlighting parentheses or styling the initial phrase of a post. Papa needs his (syntax-lighting) sugar.